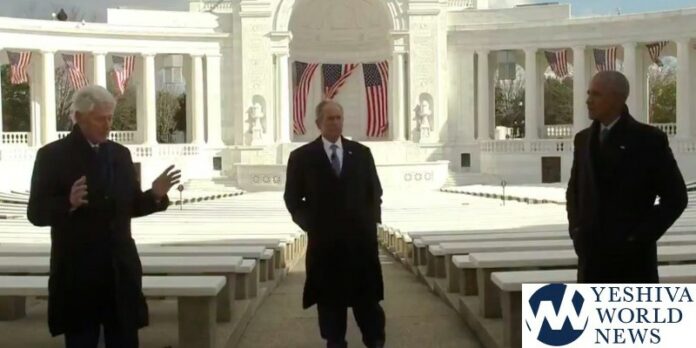 In a show of unity and bipartisanship, the three former president who attended Wednesday’s inauguration recorded a video while they were at Arlington National Cemetery earlier in the day.

Former President Barack Obama kicked off the discussion, noting his pride in watching his former vice president and the first Black, South Asian American and female vice president being sworn into office. Then the group turned to address the day’s theme of unity.

“I think that the fact that the three of us are standing here talking about a peaceful transfer of power speaks to the institutional integrity of our country,” said former President George W. Bush.

He also called on Americans to love one another the way they’d like to be loved, while former President Bill Clinton said more directly, that “everybody needs to get off their high horse and reach out to their friend and neighbors to try to make it possible.”

The three former presidents ended the video by offering some parting words to Biden.

“Mr. President, I’m pulling for your success. Your success is our country’s success,” Bush said, paraphrasing a message his father left for Clinton during their transition.

And Obama told his former vice president that they’d all be there for him.

“Joe, I’m proud of you. And you and Kamala need to know that you’ve got all of us here rooting for your success, keeping you in our prayers, and we will be available in any ways that we can as citizens to help you guide our country forward,” Obama said. “We wish you godspeed.”