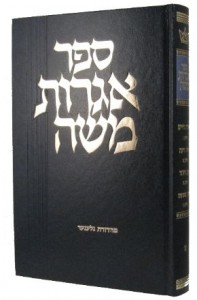 After many years, a brand new volume in the famous Igros Moshe series by Hagon Harav Moshe Feinstein zt”l, has been released. This volume includes responsa on all four chalakim of Shulchan Aruch, as well as a section on Kodashim and Taharos, and NEW to this series, a section of “Igros Hashkafah”. An important addition to the library of every Torah Jew!

The monumental (now) nine-volume set contains the collected letters of Hagon Rav Moshe Feinstein ZATZAL, one of the greatest and most well-respected halachic authorities of the 20th century. These letters offered detailed responses to questions of halacha that he had been asked.

Studied by Jews around the world, these “responsa” letters (as they are known) offer a glimpse into the deep understanding of a master of Jewish law, Talmud and Tanach.