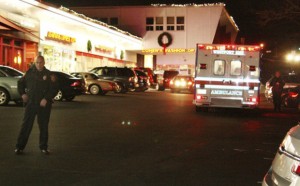 Westport, CT – One person was fatally wounded and another critically injured after a shooting during a robbery at a Westport jewelry business, police said.

Westport police said they received a 911 call from one of the victims at about 10 p.m. Thursday from YZ Jewelers at 431 Post Road East.

Investigators said the incident was not random, and believe the two men were specifically targeted.

Police said YZ Jewelers is a wholesaler and manufacturer, and an appointment is necessary to gain entry to the business. There are no signs advertising the business on the outside of the shopping plaza.

Police this morning so far have released little new information other than the owner, Yekutiel Zeevi, 59, died after being gunned down in the second-floor suite at the Compo Shopping Center where his business, Y.Z. Jewelry Manufacturing, is located, and an associate also was wounded.

That person is in critical condition Friday morning in Norwalk Hospital, but has been able to help police with their investigation, according to Westport Police Chief Dale Call. The associate’s identity has not been released.

Call confirmed that video surveillance is being used to guide investigation and that technicians from the State Police are working with the security company to analyze the tape.

Police said Friday that they believe there was only one shooter, but don’t know if he fled on foot or in a vehicle.

Eddie Elias, a family friend of Zeevi, said Friday the murdered man was kind and friendly.

“He had a love for his friends an the community of Westport, said Elias, 52, of Westport, who said he had visited with Zeevi’s family Friday morning after hearing the news.

“When I heard, I was in shock,” Elias said. “The first thing I did was go home and hug my wife.”

“This is a big, big loss,” he said. “It is unfair that this happened to this kind of a person.”

Zeevi, who had run the jewelry business for about three decades, and his family were members of Temple Israel in Westport.

Elias said he doesn’t know who the second shooting victim is, but said it was likely a helper who Zeevi would bring in the help with the demand for jewelry gifts as the holidays approach.

“This is not just someone walking in randomly,” he said. “This is not a store. This is the kind of place where you make appointments.”

On its website, the business billed itself as “Manufacturers and Cutters of Fine Diamonds and Jewelry,” and is located in a second-floor suite of the Compo Shopping Mall at 431 Post Road East.

Anyone seeking entry to the business was required to ring a bell on the building’s lower level to be admitted. That access presumably was restricted because of the gems and precious metals on the premises used to make custom jewelry.

The shooting, about 10 p.m. Thursday, took place long after standard business hours, which are listed as 10 a.m. to 5 p.m. Tuesday through Saturday.

At Y.Z. Manufacturing, the ad notes, “you deal directly with the manufacturer — no middle man.”

Police ask that anyone who was in the area of the Compo Shopping Center between 9:30 and 10 p.m. and observed anything suspicious to call the Westport police detective bureau at 203-341-6080.