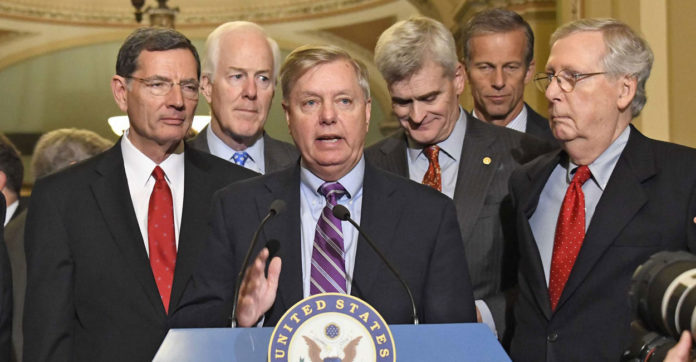 Only one thing is certain for insurance shoppers if the latest attempt to replace former President Barack Obama’s health care law succeeds: Uncertainty.

Will you be able to get coverage? How much will it cost? Will it cover my conditions?

The proposal, sponsored by Sens. Lindsey Graham of South Carolina and Bill Cassidy of Louisiana, would shift funding and key coverage decisions for both private insurers and Medicaid to states instead of the federal government. That means the availability and price of coverage could vary dramatically from state to state.

The measure is the subject of hot debate in Washington, and senators may vote on it later this week, but its prospects are shaky. Republicans released a revised version Monday morning in hopes of convincing a few crucial holdouts. If three Republican senators oppose the bill, it will die. Arizona’s John McCain and Kentucky’s Rand Paul say they will not support the bill, and Texas’s Ted Cruz and Maine’s Susan Collins have said they would either oppose it or are leaning that way.

If the proposal does become law, some changes would be immediate, but the biggest ones would happen two years from now and depend on how states and insurance companies decide to operate under the new system.

The Affordable Care Act expanded the Medicaid coverage program for the poor in many states and created health insurance exchanges or marketplaces where shoppers could buy private coverage with help from tax credits. The Graham-Cassidy bill would halt that expansion and could trigger big changes in the marketplaces. Here’s a look at what we know and don’t know:

WHAT CHANGES RIGHT AWAY?

You will no longer have to pay a fine for not having coverage. That penalty can climb up to around $2,000 depending on household income and is one of the most unpopular elements of the ACA. The Graham-Cassidy bill removes it retroactively as well as for future years. So if you didn’t buy coverage this year, you won’t have to pay a fine.

The penalty for companies with 50 or more full-time employees that do not offer coverage also would go away. Employer-sponsored coverage is the most common form of health insurance in the United States, covering an estimated 151 million people under age 65, according to the non-partisan Kaiser Family Foundation, which studies health care issues.

WHAT CHANGES IN THE FUTURE?

The bill would repeal the ACA’s Medicaid expansion and tax credits that help pay for private coverage for individuals starting in 2020. Instead, that money would be redistributed to states according to new formulas.

Some states like Texas may wind up with more money than they receive now. Others like California are expected to face a big cut.

Overall, states could see a $215 billion cut in federal funding for health insurance through 2026, the consulting firm Avalere found in a study released last week, before senators revised the bill.

States that receive a cut may have to determine how to stretch that smaller amount of money to help people buy private insurance and cover those who benefited from the expansion of Medicaid.

WILL I BE ABLE TO KEEP MEDICAID OR GET INDIVIDUAL COVERAGE?

Adults without children who received coverage through the ACA’s Medicaid expansion would lose it under the new bill. States may decide to change who is eligible for Medicaid or pull back on what the program covers, depending on how their funding changes. That means people with Medicaid might see cuts to dental, vision or pharmacy benefits.

Health care researchers say they expect more people to be left uninsured by the Graham-Cassidy bill, but it’s too early to say how many.

“It’s pretty easy to determine which states will be winners and losers, but it’s nearly impossible to tell for sure how individuals will fare,” said Kaiser’s Larry Levitt.

It’s also too early to predict whether insurers will stick around to sell coverage in the revamped markets. Many have already pulled back due to steep losses and trouble attracting enough healthy people.

It may get even harder to attract healthy customers if there’s no mandate requiring people to buy coverage and less financial support for those who do shop. The future of state-based insurance marketplaces, which give consumers a place to shop for coverage, also is unclear.

WHAT IF I HAVE A PRE-EXISTING CONDITION?

The bill prevents insurers from denying anyone coverage based on a medical condition that existed before they got insurance. But states will be able to allow insurers to set prices based on a person’s health or tailor benefits to discourage people with costly conditions from signing up. The bill says the states have to describe how they intend to maintain access to affordable coverage for people with pre-existing conditions, but it doesn’t guarantee that access.

WILL MY EMPLOYER DUMP MY COVERAGE?

Not likely, but it may get less comprehensive.

Businesses still see benefits like health insurance as a way to attract and keep good workers, and many companies were motivated to offer coverage before the ACA became law.

But some employers might offer skimpier insurance that just protects against huge expenses like hospital stays, if they would no longer face a penalty for not offering more comprehensive coverage required under the ACA.