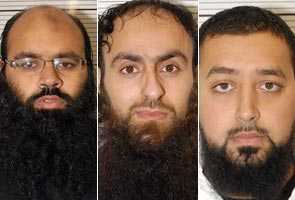 Three young British Muslim men went on trial in London on Monday, accused of plotting to set off multiple bombs in terrorist strikes that prosecutors say could have been deadlier than the 2005 London transit attacks.

Prosecutors allege that the men, fired up by the sermons of a US.-born al-Qaida preacher, hoped to cause carnage on a mass scale. But their plot was undone by mishaps with money and logistics, and ended in a police counterterrorism swoop last year.

Prosecution lawyer Brian Altman told a jury that Irfan Khalid and Ashik Ali, both 27, and 31-year-old Irfan Naseer, were central players in a plan to mount a terrorist attack “on a scale potentially greater than the London bombings in July 2005.”

Fifty-two commuters were killed when four al-Qaida-inspired suicide bombers blew themselves up on London’s bus and subway network on July 7, 2005.

The suspects are among a group of men and one woman arrested in September 2011 in the central English city of Birmingham. All three are charged with preparing for terrorism by plotting a bombing campaign, recruiting others and fundraising. Khalid and Naseer also are accused of traveling to Pakistan for terrorism training.

They have pleaded not guilty.

Altman said the three were key figures in a plan to detonate up to eight knapsack bombs in a suicide attack, or to explode timer bombs in crowded areas “in order to cause mass deaths and casualties.”

Prosecutors say targets and other details had not been finalized when the men were arrested.

The three defendants sat quietly and appeared to follow proceedings closely from the dock at London’s high-security Woolwich Crown Court. The trial is due to last several weeks.

Altman said the trio were the senior members of a home-grown terror cell inspired by the anti-Western sermons of U.S.-born Islamist cleric Anwar al-Awlaki, who was killed in Yemen in September 2011.

Altman said Naseer and Khalid traveled to Pakistan for terror training, where they learned details of poisons, bomb-making and weapons use and made “martyrdom videos” justifying their planned attacks.

On their return in July 2011, he said, they began to recruit others to the plot and to raise money by posing as street collectors for Muslim charities. Altman accused the men of “despicably stealing from their own community” to fund their plot.

They also began experimenting with chemicals “to make an explosive mixture for use in an improvised explosive device,” the prosecutor said, aided by Naseer’s academic background — he has a degree in pharmacy.

Many of the group’s plans soon went awry, however. Four other young men dispatched by the plotters to Pakistan for terrorist training were sent home within days when the family of one man found out, Altman said. They have pleaded guilty to terrorism-related offenses.

Rahin Ahmed, an alleged co-conspirator described in court as the cell’s “chief financier,” attempted to increase the group’s budget by trading the money it had made through bogus charity fundraising on the financial markets.

He lost the bulk of the terror cell’s money through his “unwise and incompetent” trading, the prosecutor said.

Ahmed has pleaded guilty to supporting terrorism. He has not yet been sentenced.