Many people are wondering why Hagon HaRav Moshe Sternbuch from Yerushalayim is currently in America. He hasn’t been in the United States in over 20 years. So why now?

This Sunday, Rav Sternbuch – who is one of the Poskei Hador – will be the keynote speaker addressing a massive gathering of Satmar Chassidim at the Nassau Coliseum. The event was orchestrated by the Satmar Rebbe of Kiryas Yoel. Rav Sternbuch is the Ra’avad of the Edah HaChareidis in Jerusalem, and a direct descendant of the Vilna Gaon.

The event was announced months ago by the Rebbe, to strengthen his Chassidim’s strong opposition to Zionism, and to strengthen their beliefs in the “Shita” of the Satmar Rov ZATZAL, the Divrei Yoel. When the Rebbe made his announcement to the event, he was very clear in his words, and invited any Jews that wished to attend (even non-Satmar) – hinting that he was extending an olive branch to the other faction of Satmar, led by his brother the Rebbe in Williamsburg. But none of the Chassidim who follow the Satmar Rebbe of Williamsburg will be attending, as they are considered much more extreme in their views.

In fact, many of the Satmar Williamsburg Chassidim were captured on dozens of viral videos seen spending hours walking around Williamsburg, Boro Park and Kiryas Yoel the past week tearing down signs announcing Sundays event. Nasty graffiti in Lashon Kodesh was spray-painted on sidewalks and walls in Williamsburg.

Last year, Satmar of Williamsburg made an event in the Barclays Center in Brooklyn which attracted more than ten thousand of their Chassidim. The event had extremist speeches addressing the crowd, some even in English – as they ranted against the Zionist State and their claims that Yeshiva Bochrim are being dragged out of Batei Midrashim and forced into the IDF; as well as their claims that Frum girls are being forced into the Military as well. Rav Aharon Schecter, the Rosh Yeshiva of Chaim Berlin joined that group as he delivered a fiery speech against Zionism and the alleged draft.

The Satmar Rebbe of Kiryas Yoel has previously given speeches – one of which where he was vehemently opposed to the violent protests orchestrated by the Peleg Yerushalayim that have crippled life in Yerushalayim. The Rebbe stated that there is no Heter to cause disruption and inconvenience to the lives of hundreds of thousands of Yidden trying to get to and from work, as they are forced into gridlock by the protests.

The Satmar Rebbe of Kiryas Yoel has also spoken about his opposition to those who claim there is a serious draft issue, and instead has indirectly sided with the vast majority of Litvish and Sephardic Gedolim and just about every one of the Admorim who have stated the same thing, that Bochrim should go to the induction centers as they have done for many decades, and get their deferment from the Military.

It remains to be seen what the full message will be on Sunday.

YWN will be bringing you a full report following the event, as well as full coverage of videos and photos. 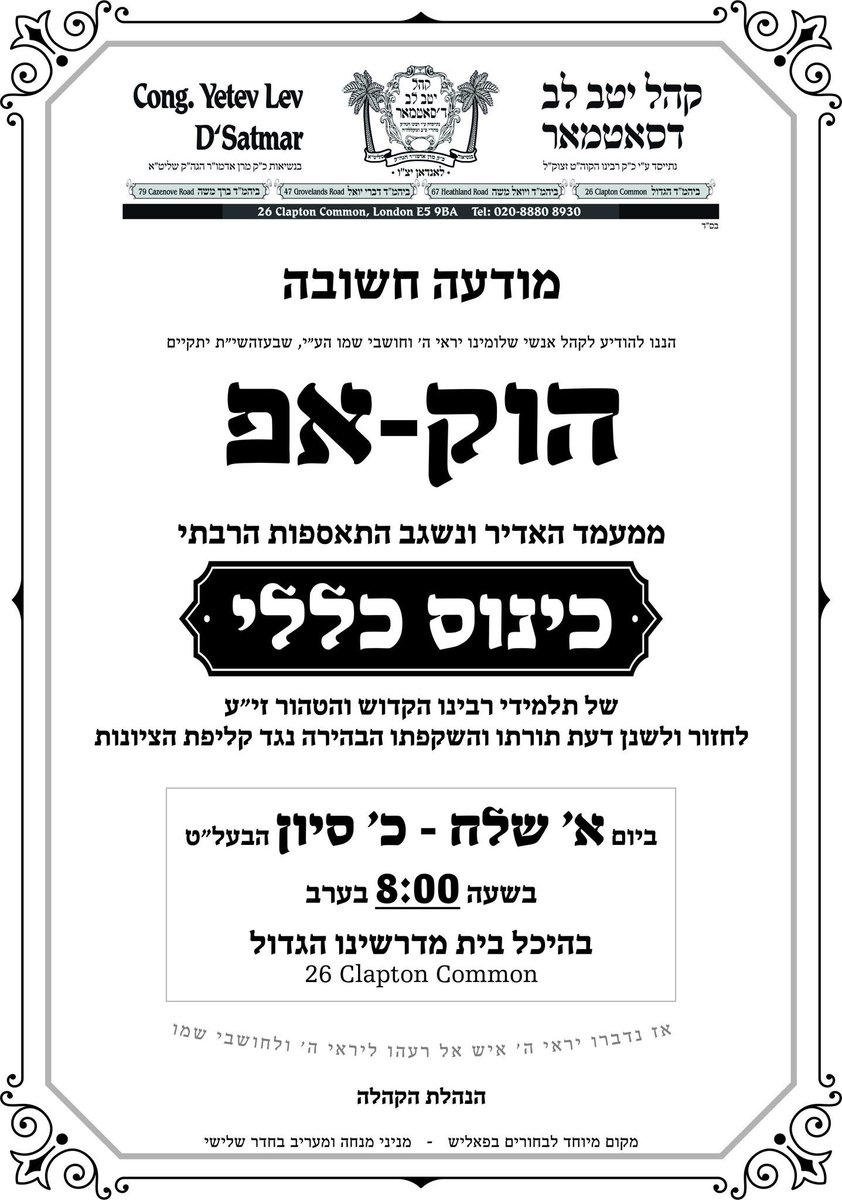 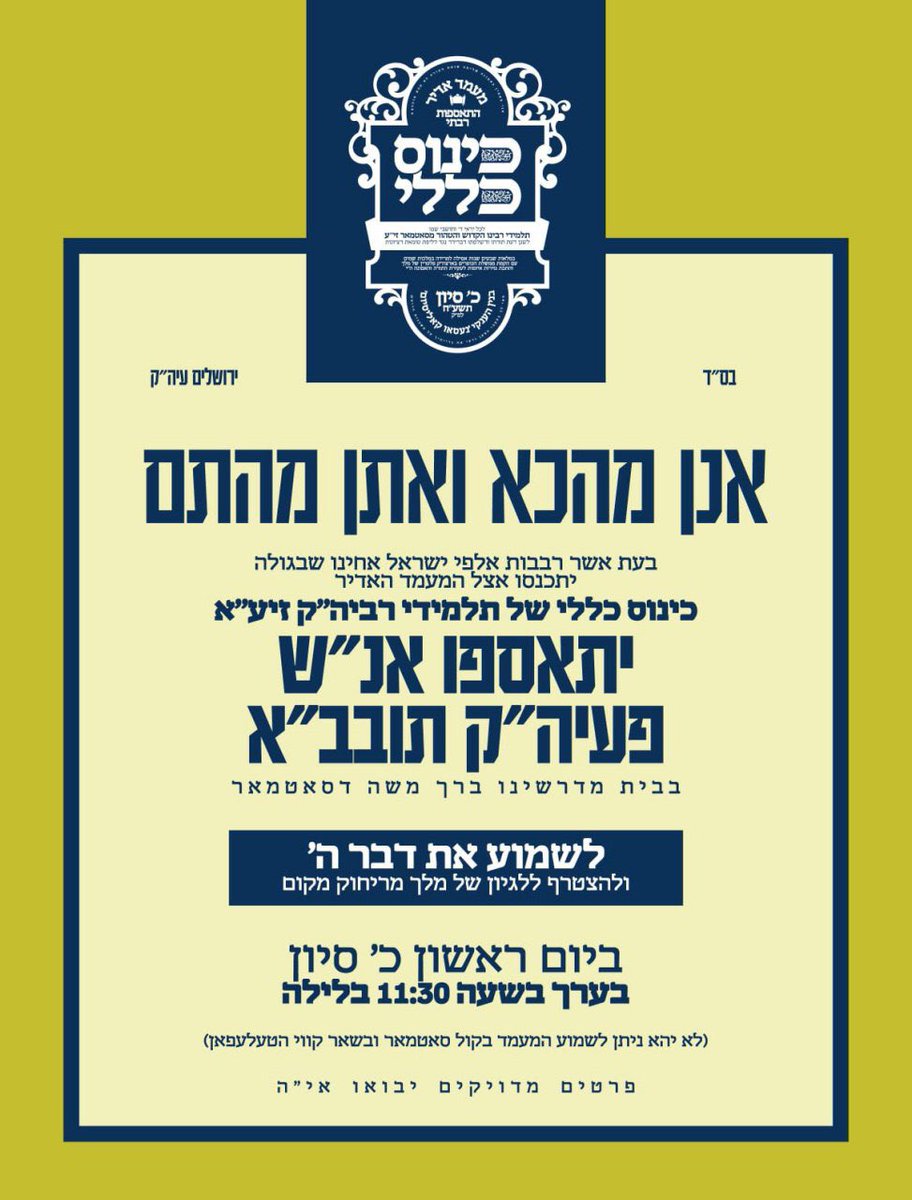 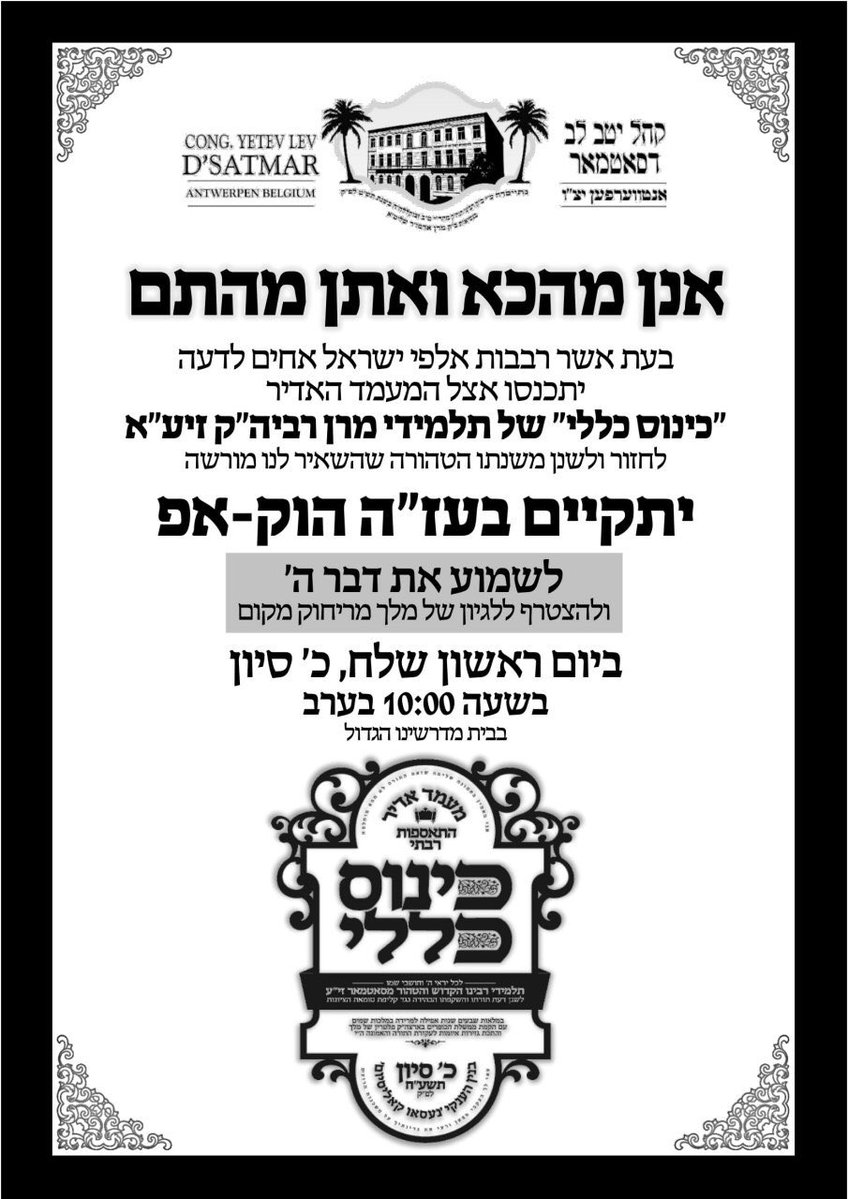 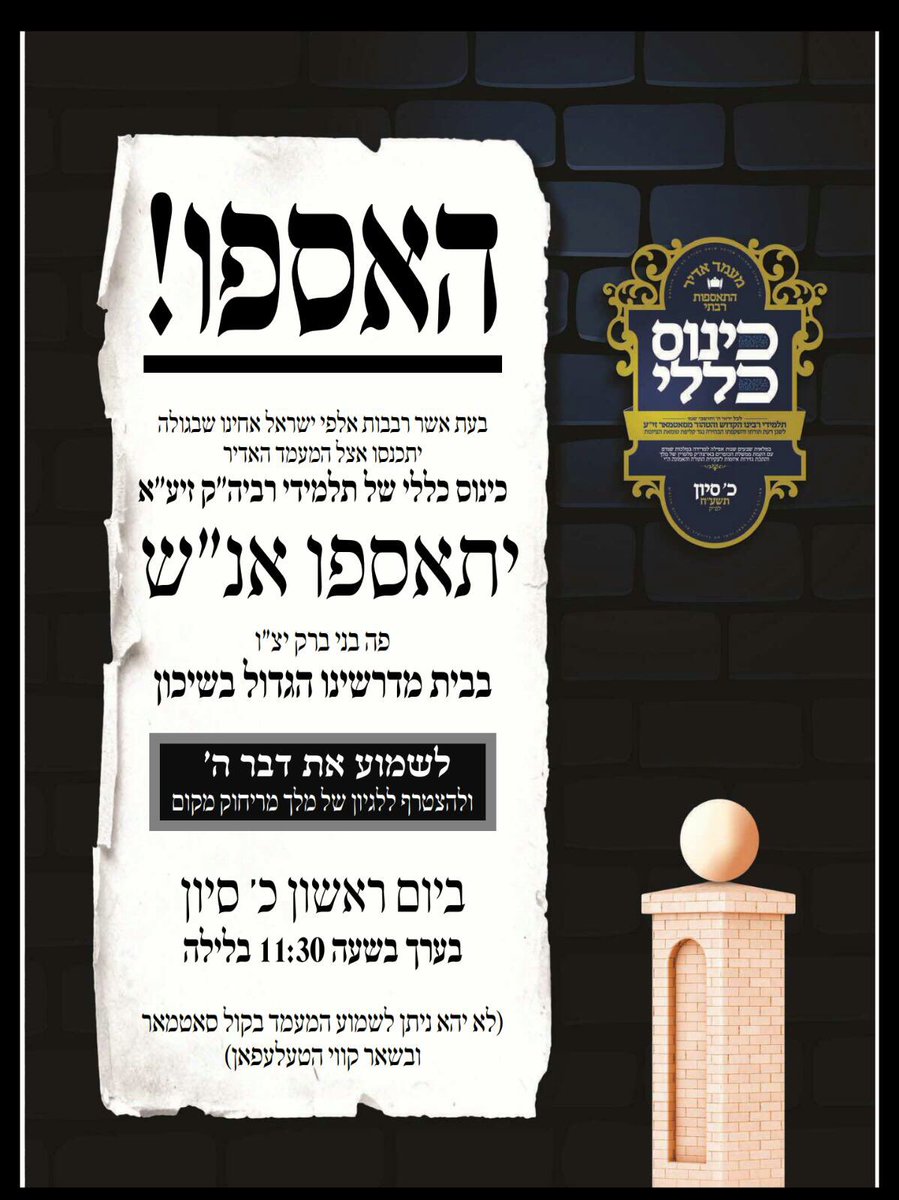 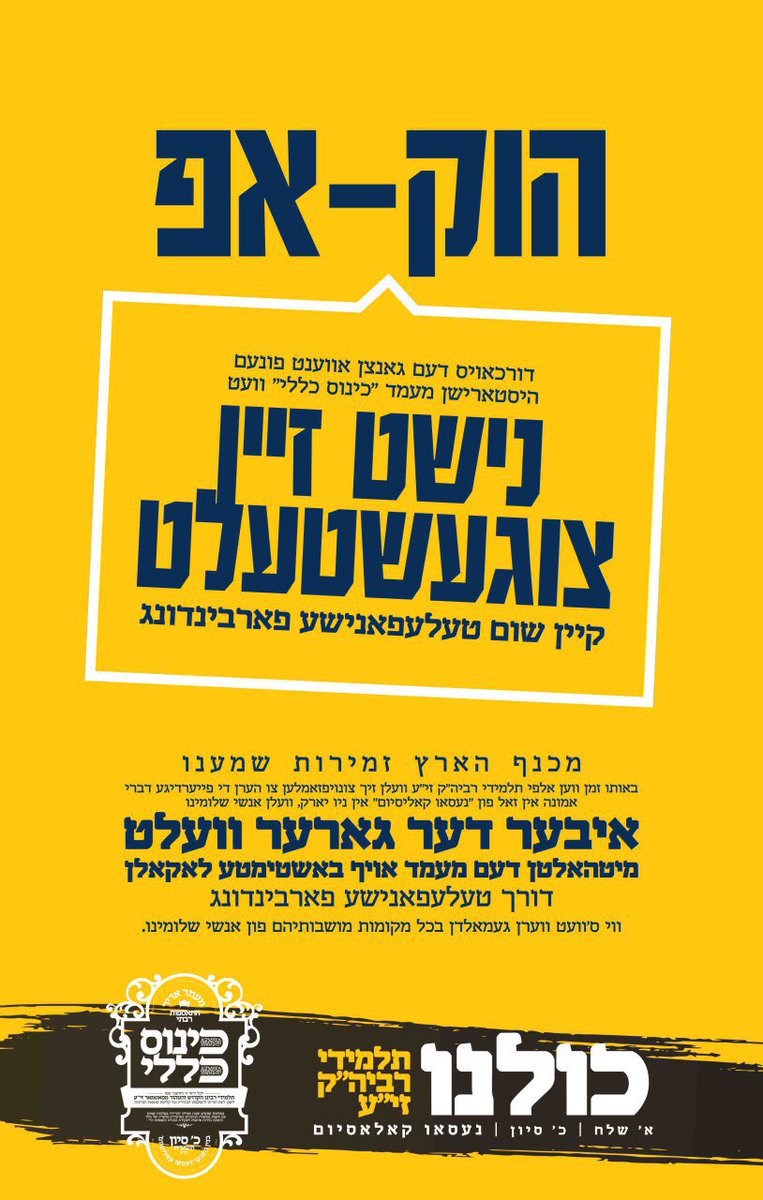 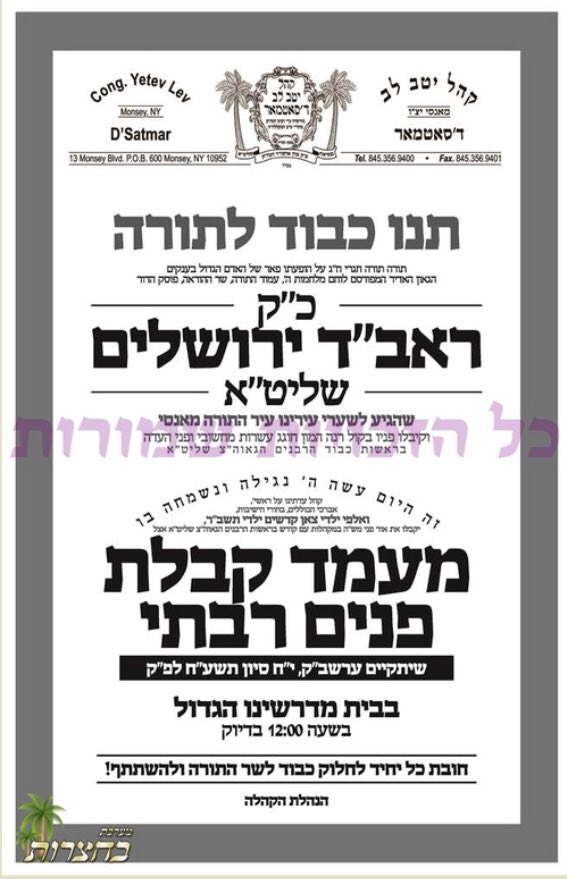 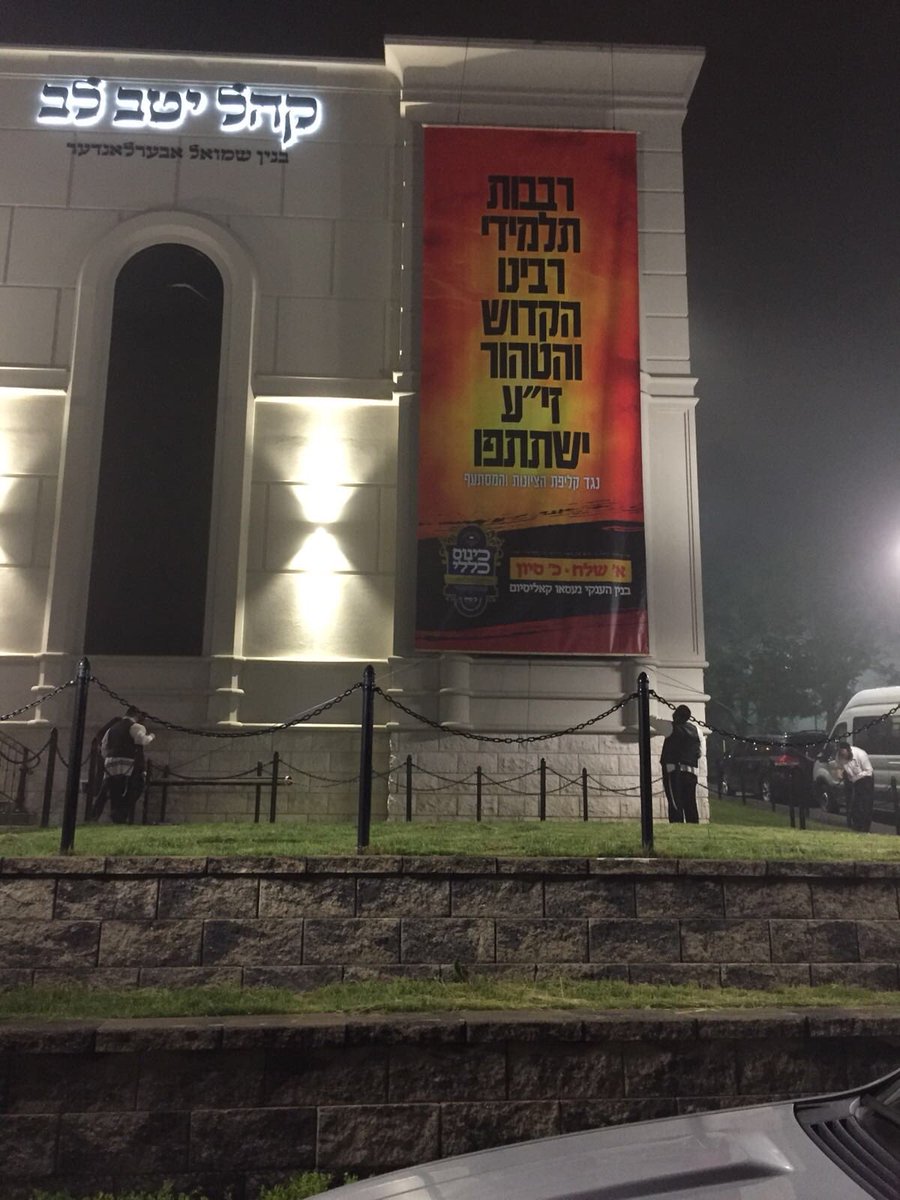 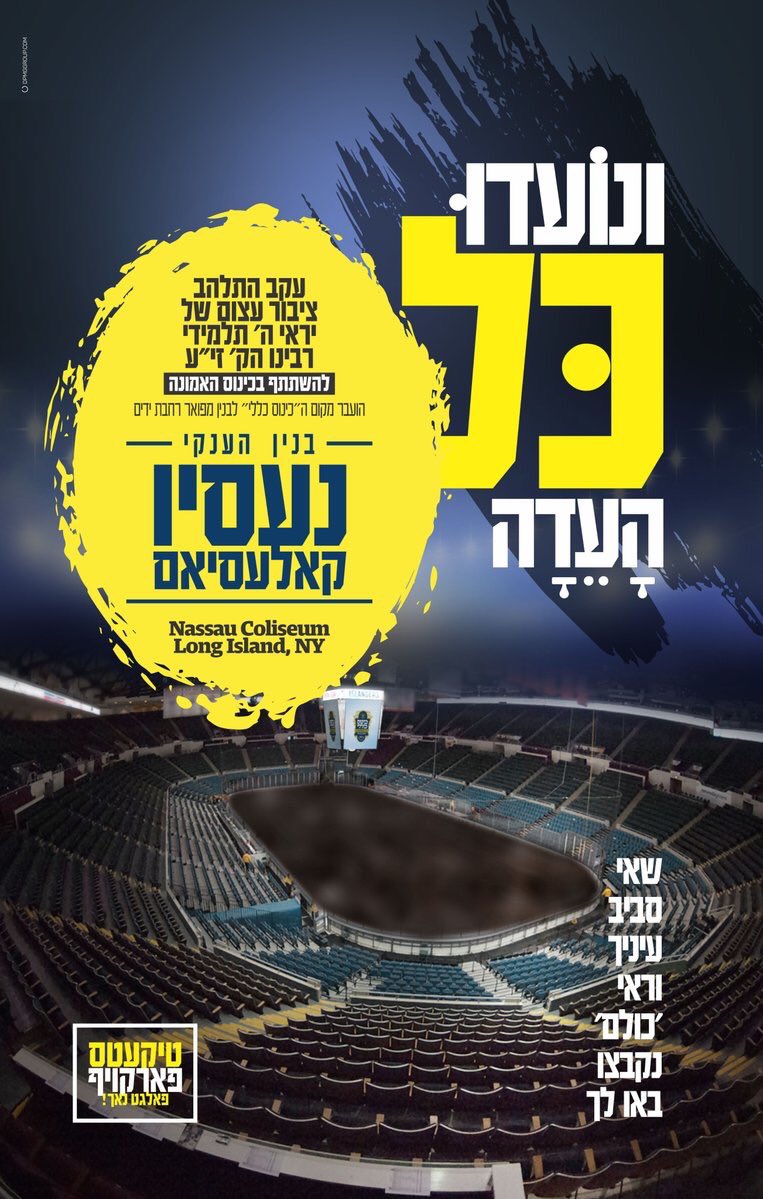 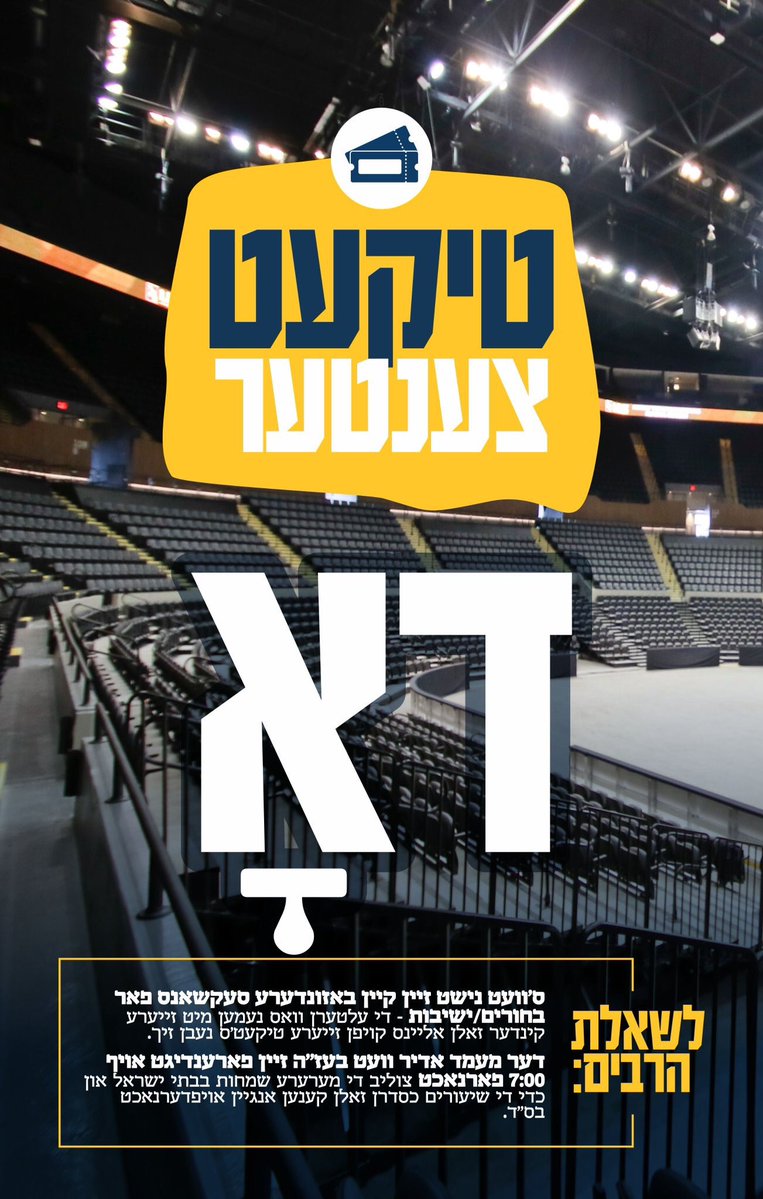 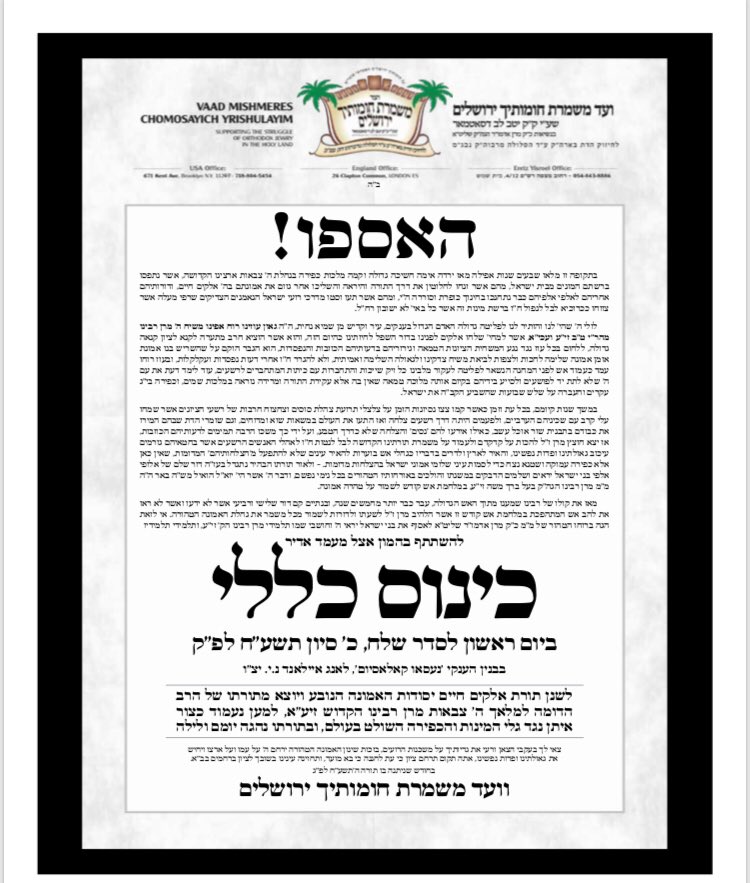 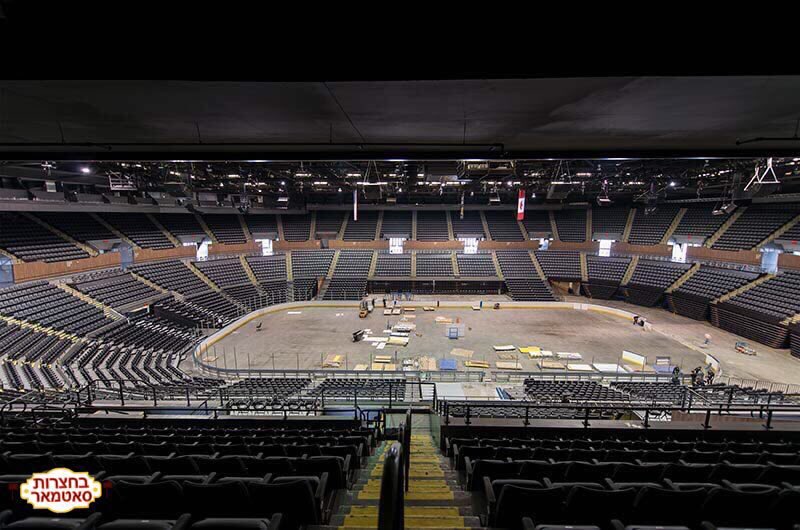 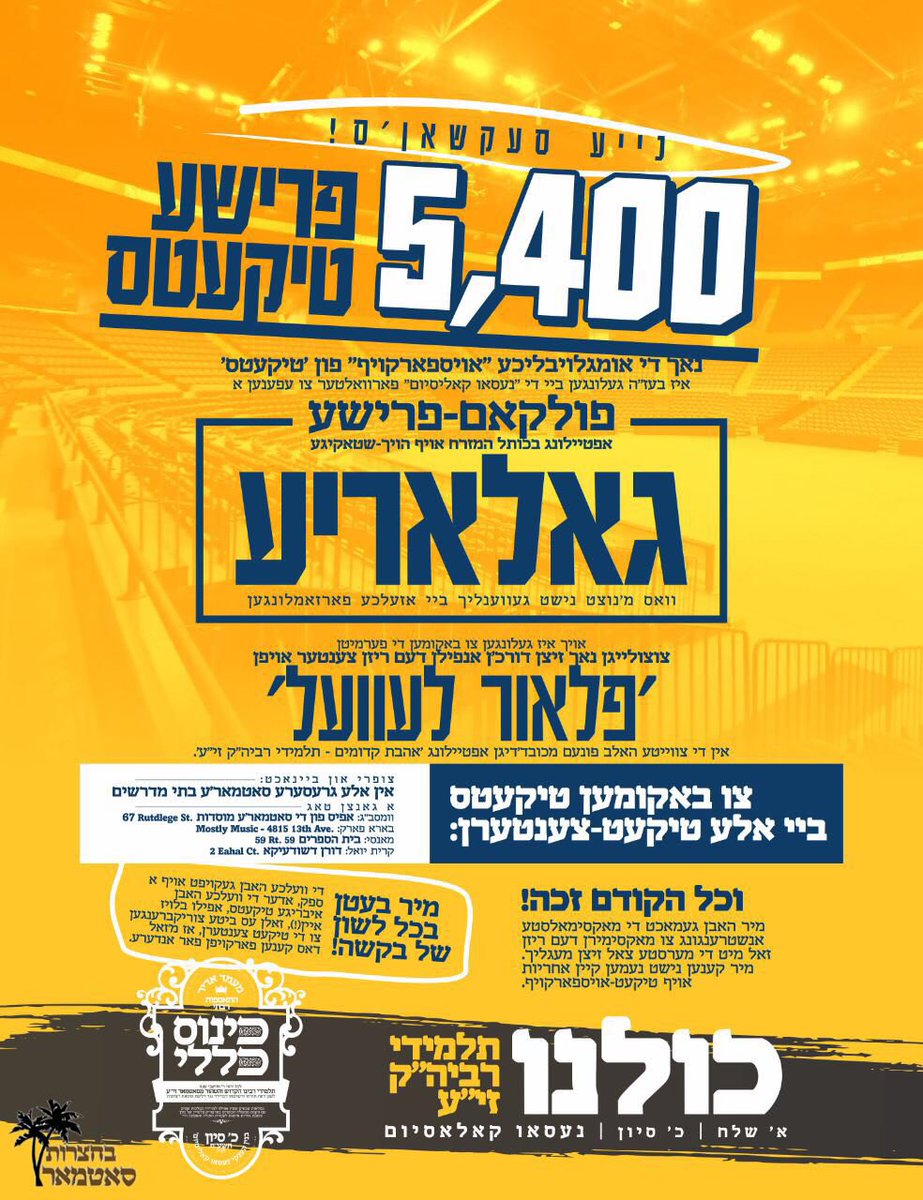 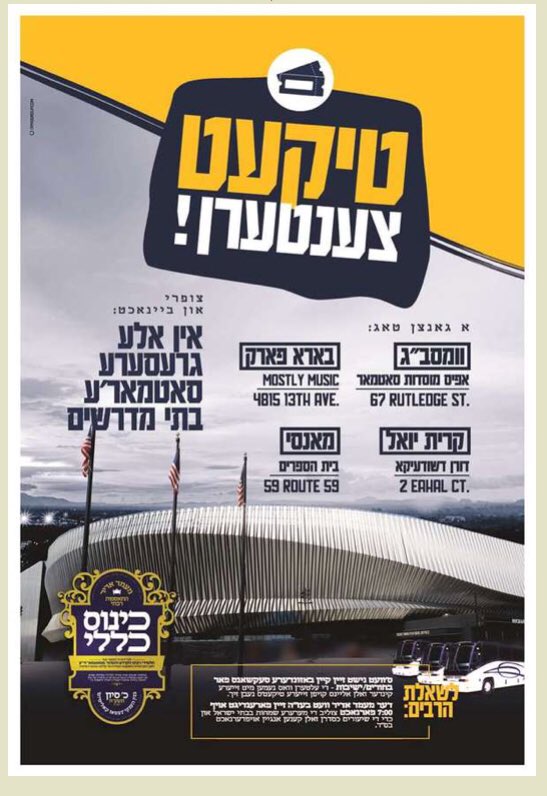 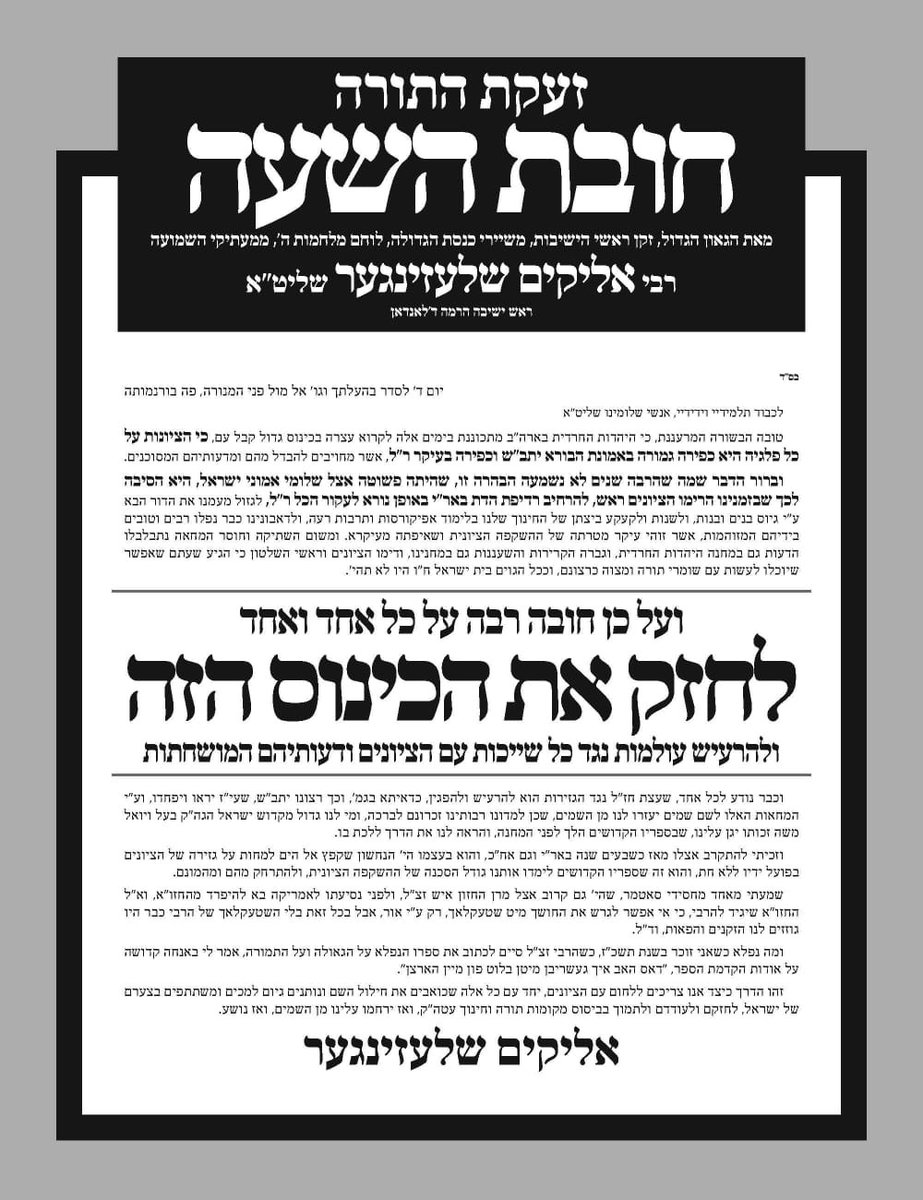 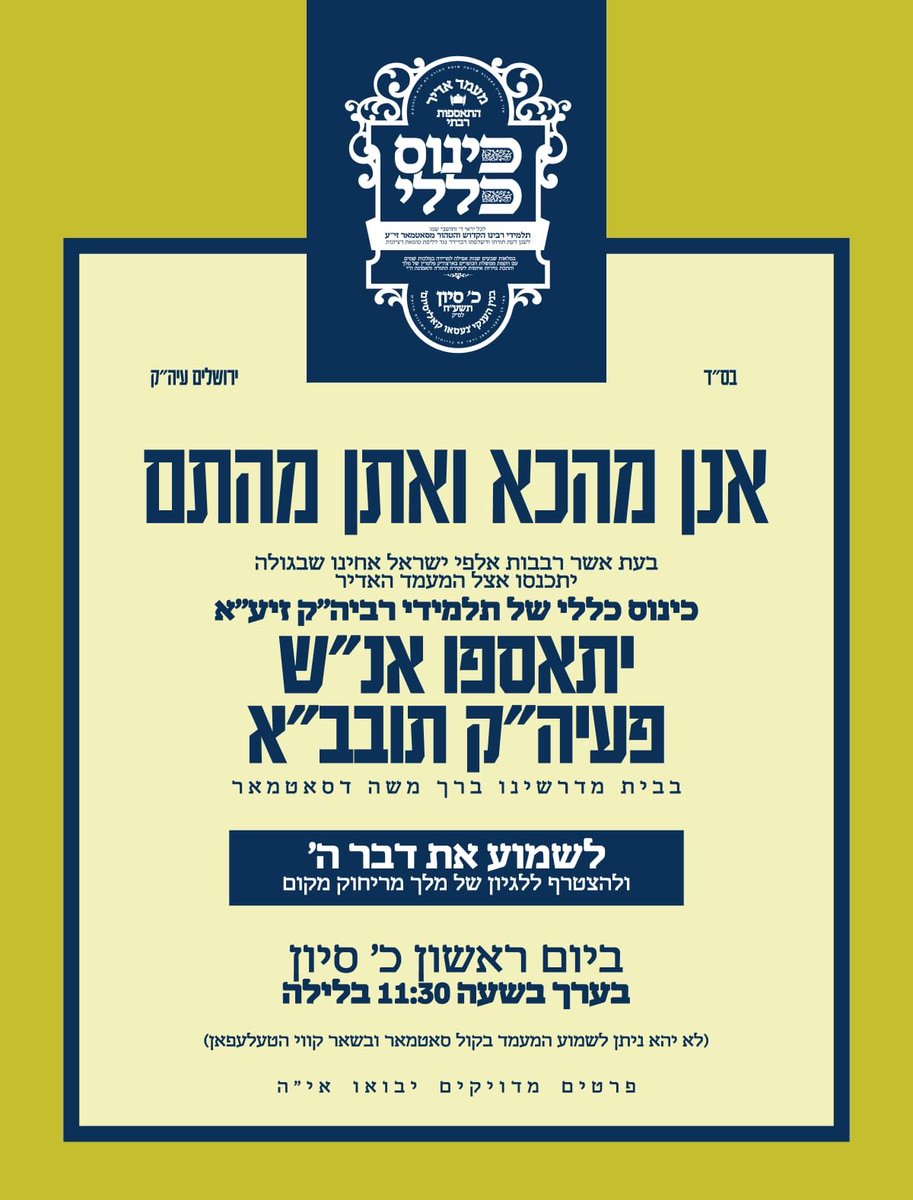