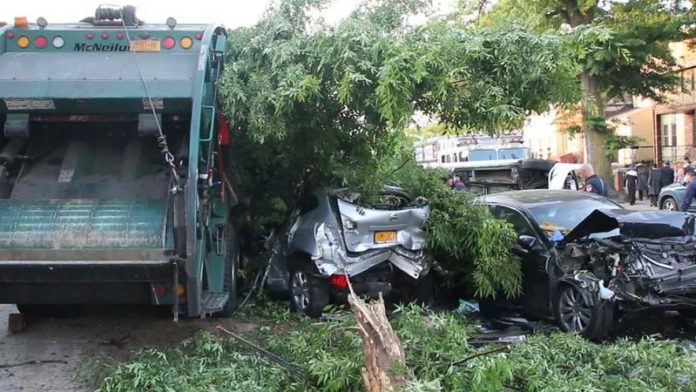 A garbage truck driver was charged with driving while impaired Saturday after plowing into nine vehicles, causing one vehicle to stack on top of another.

The driver, 40-year-old Anthony Castaldo of Brooklyn, is accused of severely damaging several cars and a front porch and knocking down trees while driving on 60th St. between 19th and 20th avenues in Borough Park about 5:20 a.m.

He is also charged with reckless driving, leaving the scene of an accident and refusing to take a breathalyzer.

The truck, owned and operated by the private garbage company Viking, literally crushed nine parked vehicles — before slamming into a tree and coming to a stop in someone’s front yard.

Miraculously, no one was hit.

The driver managed to jump out of the truck and flee on foot before being apprehended by police.

LOOK: This garbage truck slammed into 9 vehicles and a house on 60th between 18th & 19th Ave in Boro Park early Shabbos morning The driver was reportedly high on drugs SEE MORE ON WWW.THEYESHIVAWORLD.COM

45 Likes, 1 Comments – TheYeshivaWorld.com (@theyeshivaworld) on Instagram: “LOOK: This garbage truck slammed into 9 vehicles and a house on 60th between 18th & 19th Ave in…”