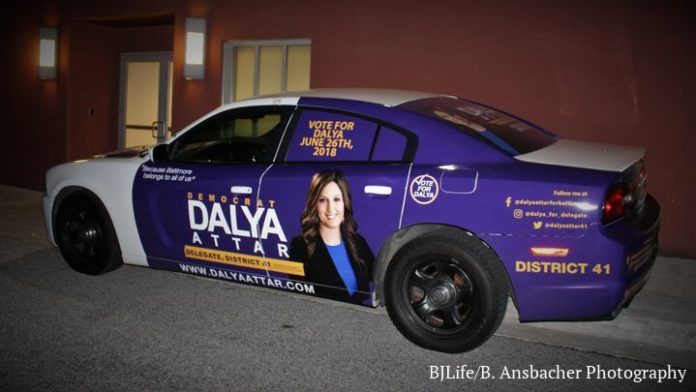 In the 41st District, Dayla Attar took a step closer to becoming the first Orthodox woman from Baltimore in the state legislature. She was the top vote getter in the district, trailed by incumbent Delegate Samuel I. “Sandy” Rosenberg and Tony Bridges, who has worked in city government and for community nonprofits.

Dalya won one of the three delegate spots in the Democratic primary for the 41st legislative district. If elected in November she will become a member of the Maryland House of Delegates.

The 41st legislative district, which encompasses all the Orthodox Jewish neighborhoods of Baltimore City, is larger than the city council district represented by Orthodox Jewish Councilman Yitzy Schleifer.

Prior to announcing her intent to run, Dalya conferred with local leading Rabbonim, securing their support for her campaign. The daughter of immigrants, Dalya wants to give back to the community that gave so much to her family. A former Bais Yaakov of Baltimore student, she holds a law degree from University of Maryland and today works as an Assistant State’s Attorney in Baltimore, prosecuting criminals and making our streets safer.

Dalya hopes to give the Orthodox community a voice in the legislature, with someone who understands the traditions and practices of the frum community. As the Baltimore Orthodox community expands rapidly, many believe it is time for a frum representative in the Maryland General Assembly.