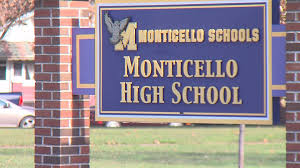 All five schools in an upstate New York district are closed for the day because of a threat made over social media.

The Monticello Central School District announced Thursday night that its schools would be closed Friday while authorities investigate the online threat.

The Times Herald-Record of Middletown reported that the Sullivan County Sheriff’s Office says the threat was posted on Instagram under the username “blaxckhood.”

Monticello is about 100 miles (160 kilometers) northwest of New York City. The district includes three elementary schools, a high school and a middle school.