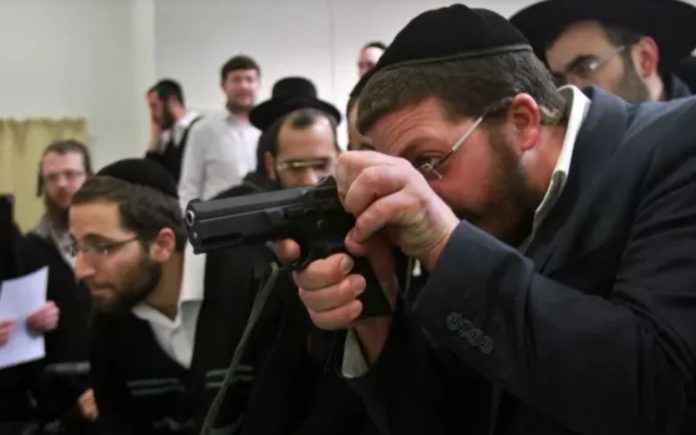 Cherev Gidon Israeli Tactical Defense Academy, an academy which teaches students how to use firearms among other forms of self-defense, has received unprecedented levels of enrollment and interest from Jews throughout Pennsylvania following the massacre of eleven Jews in the Tree of Life Synagogue in Pittsburgh this past Shabbos.

The status of the enrollment spike was first reported by Reuters, according to whom, hundreds of people have contacted the center since Sunday.

A veteran officer from the IDF who runs the academy, Yonatan Stern said; “The truth is we are at war. We want every Jewish person in the United States to be armed.”

Stern, served int he Netzach Yehuda infantry battalion while he was in the IDF. He is a resident of Kiryat Araba in Israel but has  lived in the United State for more than a decade now. He opened the training academy to help teach American Jews how to use weapons and other forms of self-defense. The academy has been around for six years and is located near Scranton.

“I was involved in a lot of combat instances, a lot of gun battles. I saw a lot of action, a lot of people being shot, people being killed, and that’s something that really motivated me to train others to protect themselves because I really don’t want to see anyone being a victim,” he explained.

“For years we have been telling American Jews that they need to get armed and trained to defend their communities against violent anti-Semitic attacks. Many listened to us, but sadly many others preferred to bury their heads in the sand and ignore our warnings. Today, our predictions came true right here in our own state of Pennsylvania and too many have had to pay the ultimate price. Do not ignore the writing on the wall: Buy a gun, learn how to use it, and carry everywhere you go, especially to Synagogue,” he concluded.

[RELATED – WATCH: Trump: If Pittsburgh Synagogue Had An Armed Guard “They Would Have Been Able To Stop” The Shooter]

ARMED AND DANGEROUS: At a gathering with local elected officials and community leaders, #Brooklyn Borough President Eric Adams said he will start carrying a gun whenever he enters a “House of Worship” following the #Pittsburgh #synagogue massacre. Adams is a former #NYPD Captain

FIGHT FIRE WITH FIRE: Following the #Pittsburgh massacre, a gun store in #Colorado is offering #synagogues a way to defend themselves. Mel Bernstein, owner of Dragon Arms just outside Colorado Spring, is offering to give rabbis a free AR-15 or a handgun. He’ll also include training and ammunition. . Bernstein made the comparison of an active shooting to a fire. He said if a fire broke out, you’d reach for a fire extinguisher to keep people safe, and by his reasoning, you should be able to reach for a weapon during an active shooting. #gun #guns #ar15 #activeshooter #ammo #ammunition