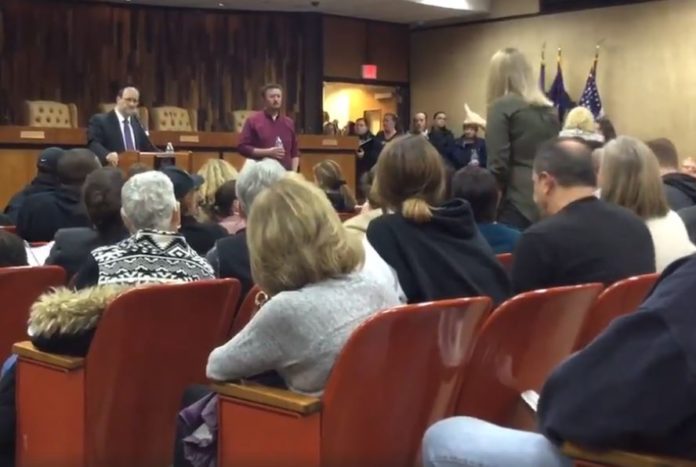 A Rabbi trying to build a Jewish girl school in Nanuet faced a very hostile crowd of residents at an informational meeting at Clarkstown Town Hall on Monday night, News12 reported.

Rabbi Aaron Fink, dean of Ateres Bais Yaakov in New Hempstead, purchased the Grace Baptist Church, where he hopes to move his private school of about 300 girls .

The packed crowd attacked Rabbi Fink even before he had begun to speak, with shouts of “go away, we don’t want you, go back to Ramapo” clearly audible.

The crowd shushed the shouters – with one woman saying “let’s all remain civilized because we are a civilized community” – allowing Rabbi Fink to begin speaking.

“We are not here to buy homes and move in to live – we are here to educate our daughters,” he said.

Some members of the crowd said they were concerned about the school’s history. Last year, emergency crews found Fink’s school on Summit Park Road operating without electricity and water while students were inside.

“There was some insinuations that we take shortcuts for the safety of our students, which is not fair, not correct. On the contrary, we followed all of our codes – we’ve always had and always will,” Fink told the crowd.

The crowd turned hostile at around the 2:15 mark of the video below, and one woman signaled for the crowd to leave the room. Some 30% of the attendees rose and left the meeting.

Rabbi Fink then rebuked the crowd: “That was the attitude in Pittsburgh. It doesn’t belong in Nanuet.”

Rabbi Fink said he is now selling his school’s current property in New Hempstead. He says he wants be a good neighbor and plans to speak with the Nanuet school district to discuss traffic concerns when they move in.

The sale is expected to close in January, but there is no word on when the school will open.

Rabbi Fink was scheduled to speak at a Clarkstown Board meeting at 7 p.m. on Tuesday, where the town supervisor will also be making a statement.