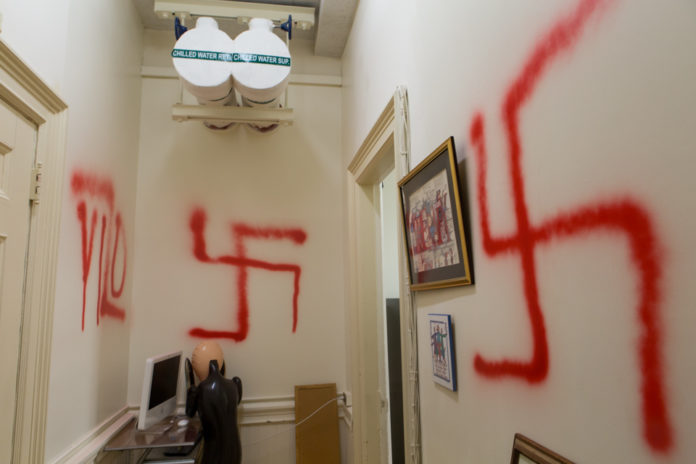 The NYPD has launched an investigation into a possible hate crime after a Columbia University professor’s office was vandalized with two spray-painted swastikas and a derogatory word aimed at Jewish people.

Professor Elizabeth Midlarsky, who is Jewish and has published various articles related to the Holocaust, told CNN, “I opened the outer door and almost passed out,” when she saw the two swastikas spray-painted in red.

Midlarsky, who has worked at the university’s Teachers College for 28 years, reported the incident to security and received support from staff before being brought home by a van.

Midlarsky was a victim of a similar incident in 2007, when a swastika was spray-painted on her office door and anti-Semitic flyers dropped in her mailbox, according to the Daily Spectator. The vandals had also written her name and crossed it out, the Daily News reported.

While police are continuing their investigation into who committed the vandalism, Teachers College president Thomas Bailey issued a statement.

“We unequivocally condemn any expression of hatred, which has no place in our society,” the statement said. “We are outraged and horrified by this act of aggression and use of this vile anti-Semitic symbol against a valued member of our community.”

I am disgusted by this abhorrent act of anti-Semitism and hate. I stand together with @Columbia and the entire Jewish community of NY. I am directing the State Police to assist in this investigation. We will hold those behind this responsible and we will rise above this hate. https://t.co/0L9cgLIhqe