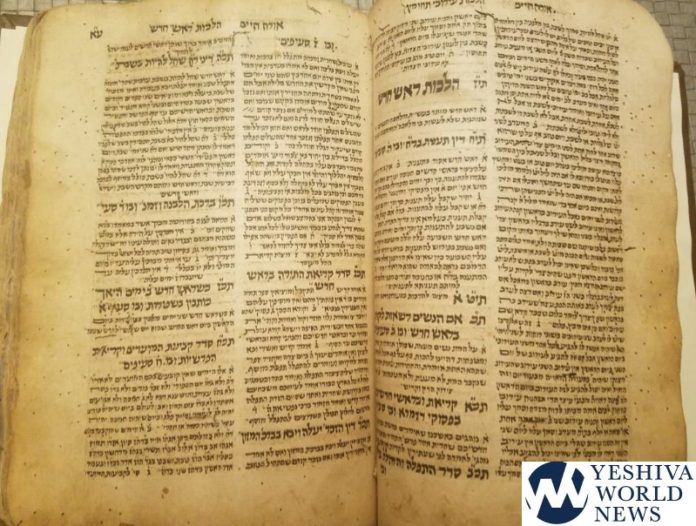 (by Rabbi Yair Hoffman for 5tjt.com)

There is a handwritten Shulchan Aruch that has been in this author’s family for centuries.  It has a very early date, however, for vesain tal u’matar. The date is in November and not December. This all has to do with Pope Gregory the XIII.

Generally speaking, the Pope’s actions do not affect what Orthodox Jews do, but here, one Pope’s actions affected the secular date of when we do things. Read on for clarification.

In 1582, Pope Gregory XIII initiated changes to the calendar that did have some repercussions in our halachic observance, at least in the way we record the secular date as to when in the year we begin amending one line in the Shmoneh Esreh in Chutz La”aretz. In Israel itself we began saying it at Maariv of the 7th of Cheshvan.

The Pope made three changes to the Julian Calendar, but at first, only the Catholic countries followed it.

What happens if you forgot to add it in?

There are actually two major brachos of the 19 brachos in Shmoneh Esreh where it can be added in – Baraich Alainu and Shmah Kolainu. Ideally, we shoot for the first, but if not we can do it in the later one.

So the answer to what you should do if you did forget, depends upon when you remembered that you did not add it in. If you remembered before saying Hashem’s name at the end of the bracha of Baraich Alaynu, then just go back to v’sain tal umatar and continue from there (MB 117:15).

IN THE NEXT OPPORTUNITY

If you remembered after saying Hashem’s Name, then you just continue on until the Bracha of Shma Koleinu and add the words, “v’sain tal umatar livracha” right after “vkabel berachamim veratzon es tfilasainu” and before “ki attah shomaya tfilas” (MB 117:16). If one still forgot and did not yet say Hashem’s name at the end of the bracha, then just say “v’sain tal umatar livracha and continue saying Ki Attah shomaya.

If you have already said Hashem’s Name – then we have a debate between the Mishna Brurah and Rav Moshe Feinstein zt”l as to what to do. The Mishna Brurah (117:19) says to say “Lamdeini chukecha” – a Pasuk in TaNach and then to say v’sain Tal uMatar livracha and finish with Ki Attah Shomaya.

Rav Moshe Feinstein questions this and asks how it is possible to just recite random Psukim in the Shmoneh Esreh? [He recommends that one just finish up the bracha and add it before one says Retzai, like the Shulchan Aruch recommends to do if you did end up finishing Shma Kolainu.] Unless you are a talmid of Rav Moshe, most people follow the Mishna Brurah.

If one has already completed the entire Shmah koleinu bracha without having said v’sain tal uMatar, then the Shulchan Aruch rules that you just say it then and recite Retzai.
If you forgot to say it before then and actually started retzai – then you are now in for some major repeating. You have to stop where you are and just go back to the beginning of Baraich Aleinu and continue saying the Shmoneh Esreh from there.

IF YOU FINISHED THE SHMONEH ESREH

NOT SURE WHAT YOU SAID

If you are not sure what you said, we assume you didn’t say it for the first 30 days. After 30 days, we assume that you did say it properly. The Mishna Brurah (114:40) suggests that if you sing the words “v’es kol minei s’vu’asah l’tova v’sain Tal uMatar livracha” 90 times then the assumption changes. We assume that you did say it. On Maariv of January 3rd (or January 4th of a leap year) is the day when the assumption changes if you did not end up following the 90 times recommendation.

My father-in-law, Rabbi Yaakov Hirch zt”l, used to keep a piece of paper in his siddur at Baraich Aleinu for those thirty days in order to remind him to add it in. This is a good idea. It also saves on not having to say the formula 90 times.

For the record, the changes were not Pope Gregory’s original idea. The idea first came from an Italian doctor named Aloysius Lilius. Most of what was to eventually become the United States of America did not adopt it, however, until the year 1752.