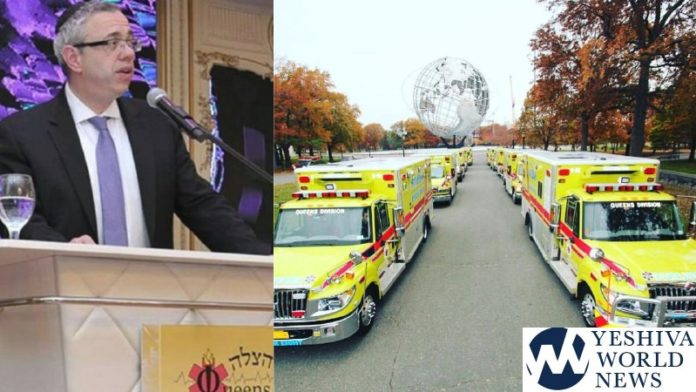 The long time coordinator and President of Queens Hatzolah announced his resignation on Wednesday night.

Rowe stunned the crowd as he laid out his reason for the resignation: Hatzolah would be billing health insurance companies.

Many neighborhoods of Hatzolah in NY have recently started billing insurance, joining Hatzolah is other areas that already do that – such as Lakewood, Monsey and others.

Rowe said that the Mora D’asra of Queens Hatzolah, HaRav Kalman Epstein, Rosh Yeshiva Sha’ar Hatorah was against this decision to bill insurance as well.

Rowe claims that the organization will take a 180 degree turn and change its character after starting to bill.

His entire speech follows in the attached video.

Queens Hatzolah was founded in 1978 by Mr Dov Rowe, father of Yitzchok Rowe. In 1979 Queens Hatzolah began transporting patients by station wagon and in 1981 purchased their first ambulance. From these humble beginnings, they have grown into their current multi faceted organization with top-of-the-line training, equipment, and ambulances.