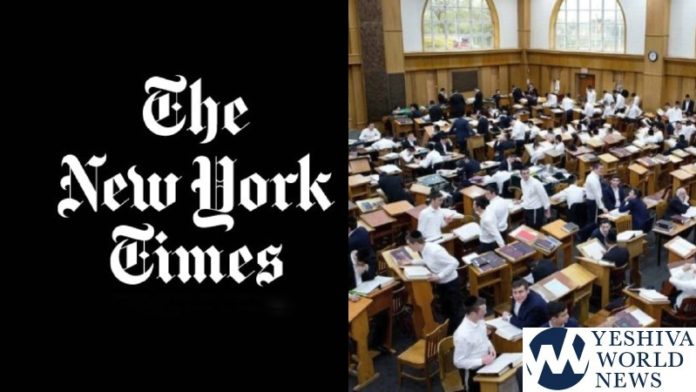 Sadly, the “Do Children get a Subpar Education in Yeshivas?” diatribe remains.

They just don’t get it.

Yeshiva Darchei Torah IS a Yeshiva, one of our best. The excellence that the Times now implicitly admits is a rebuttal of the entire article – not just the picture.

And they replaced the picture of Darchei Torah with one of Yeshiva of Flatbush. Not only that, but the caption under the image says “A group of graduates from ultra-Orthodox Jewish private schools in New York claim that some yeshiva students are never taught secular lessons, like science or history. Credit Mark Lennihan/Associated Press”

The New York Times should do the right thing – TAKE THE ENTIRE ARTICLE DOWN!

Via @NYTimes: "In parts of New York City, there are students who can barely read and write in English and have not been taught that dinosaurs once roamed Earth or that the Civil War occurred. Some of them are in their last year of high school. That is the claim made by a group of graduates from ultra-Orthodox Jewish private schools called yeshivas, and they say that startling situation has been commonplace for decades." . READ RAV YAAKOV BENDER'S RESPONSE to this outrageous hit-job on WWW.THEYESHIVAWORLD.COM [Link in InstaStory]