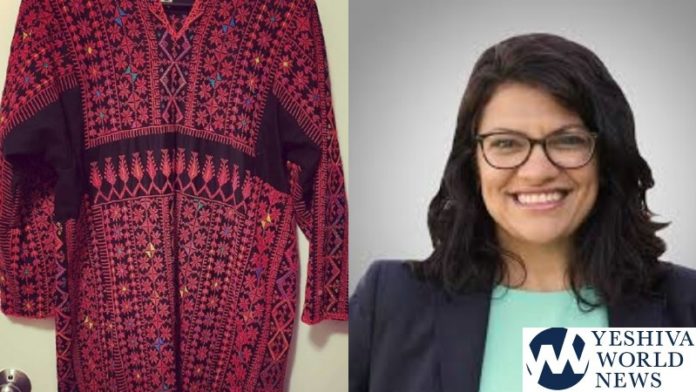 Rep.-elect Rashida Tlaib, who will be one of the first Muslim women in Congress, shared a photo of the Palestinian gown she plans to wear during her swearing-in ceremony early next year.

In a photo on Instagram, Tlaib wrote, “Sneak peek: This is what I am wearing when I am sworn into Congress. #PalestinianThobe #ForMyMama.”

Tlaib is the daughter of Palestinian immigrants and became the first Muslim female member of Michigan’s state legislature a decade ago. She was seen at her victory party wrapped in a Palestinian flag.

A self-styled progressive, Tlaib is a vocal critic of President Donald Trump and was arrested two years ago for disrupting a Trump speech in Detroit.

Asked during an interview with Great Britain’s Channel 4 News whether she would vote against military aid to Israel when she goes to Congress, Tlaib said “absolutely.”

Sneak peek: This is what I am wearing when I am sworn into Congress. #PalestinianThobe #ForMyYama

“WE’RE GOING TO CONGRESS!” Rashida Tlaib – a #Palestinian and one of the first 2 #Muslim women elected to Congress – celebrates her victory