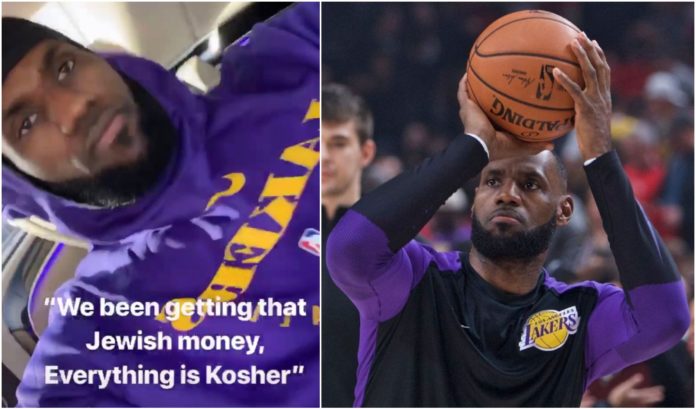 NBA superstar Lebron James has apologized for a social media post about “Jewish money”, claiming he thought it “was a compliment”.

James shared the attached selfie with his 45.8 million Instagram followers on Saturday, featuring lyrics from a rap song which references keeping “kosher” and “getting that Jewish money” – a well known anti-Semitic stereotype.

“Apologies, for sure, if I offended anyone,” James told ESPN shortly after his Los Angeles Lakers lost to the Memphis Grizzlies.

“That’s not why I chose to share that lyric. I always [post lyrics]. That’s what I do. I ride in my car, I listen to great music, and that was the byproduct of it,” James added. “So I actually thought it was a compliment, and obviously it wasn’t through the lens of a lot of people. My apologies. It definitely was not the intent, obviously, to hurt anybody.”

ESPN reports the league office has been in contact with James about the post and accepted his explanation that he made a mistake.

The controversy comes just days after the superstar stirred controversy by saying the “old white men” NFL team owners embrace a “slave mentality” to keep control of their players.

Hikind charged that James might have had second thoughts before posting the anti-Jewish lyric if fellow elected officials spoke out more forcefully about anti-Semitism.

“Once again, I call on fellow Democrats to open their mouths. So far, there’s been no outcry—just a whimper. If these slurs came from the political Right, they’d be tagged for what they are: classical anti-Semitism without even the smokescreen of an anti-Israel agenda. Wake up, fellow Democrats. We need one standard for everyone. As Dr. Martin Luther King warned us, ‘Injustice anywhere is a threat to justice everywhere,’” Hikind wrote on Facebook.

Surprised LeBron, who makes very few mistakes, put this out. Does quoting lyrics from a song absolve the person quoting from the responsibility behind the words? I’d argue no, especially with a following of 45 million. pic.twitter.com/efv9gkXres

Jews make up 1.4% of the US population, so I expect people to not understand why saying “getting that Jewish money” is offensive. That Jews are disproportionately wealthy to their population does not take away from the fact that the term “Jewish $” means Jews are ALL ABOUT $.