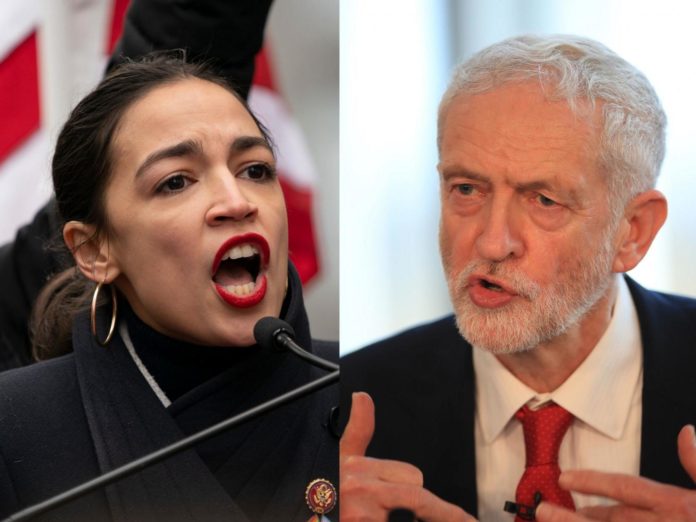 Rep. Alexandria Ocasio-Cortez (D-NY) has been criticized online after she held a phone call with British Labour leader Jeremy Corbyn, a staunch critic of Israel who has been accused of anti-Semitism.

“Great to speak to @AOC on the phone this evening and hear first hand how she’s challenging the status quo,” Corbyn wrote on Twitter.

“Let’s build a movement across borders to take on the billionaires, polluters and migrant baiters, and support a happier, freer and cleaner planet.”

Ocasio-Cortez also celebrated the call, replying that the conversation was “lovely” and that she and Corbyn shared “a great hope in the peace, prosperity, and justice that everyday people can create when we uplift one another across class, race, and identity both at home and abroad.”

It was an honor to share such a lovely and wide-reaching conversation with you, @jeremycorbyn!

Also honored to share a great hope in the peace, prosperity, + justice that everyday people can create when we uplift one another across class, race, + identity both at home & abroad. https://t.co/7qnz42I8du

Corbyn and his Labour Party have led the opposition against Prime Minister Theresa May’s plan for the UK to leave the European Union. Corbyn has been staunchly criticized for his leadership amid the ongoing Brexit negotiations.

Polls have shown 85% of British Jews believe Corbyn is anti-Semitic, and responsible for the toxic environment inside his political party. He has honored Palestinian terrorists who killed Israelis, and met the mastermind of the Har Nof Shul massacre just weeks before the attack. He has urged British educators to compare Israeli actions to Nazi Germany, and has allowed that twisted belief to spread to his supporters.

I’m a huge huge fan of yours. I hope you’ll take a look at the amount of Jews trying to call attention to Corbyn’s long, documented history of anti-Semitism.

The left’s blind spot in this regard can still be fixed. But we need leaders like yourself to listen.

Ocasio-Cortez thanked Nehorai for his concern.

“We cannot and will not move forward without deep fellowship and leadership with the Jewish community,” she said. “I’ll have my team reach out.” She signed the tweet with a heart icon.

Hi @PopChassid – thank you for bringing this to me. We cannot + will not move forward without deep fellowship and leadership with the Jewish community. I’ll have my team reach out. 💜