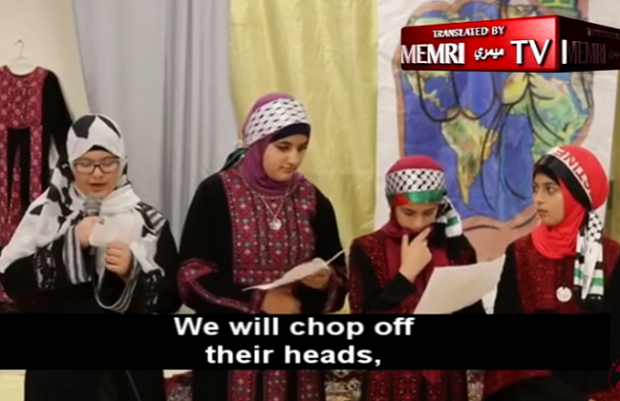 A video showing children speaking in Arabic about sacrifice and chopping off heads wasn’t vetted before being posted on the Facebook page for the Muslim American Society’s Philadelphia chapter, and it does not represent their values, the executive director of the national group said Sunday.

Executive Director Ayman Hammous said the Muslim American Society learned of the content of the video after the Middle East Media Research Institute posted a translation Friday. The society issued a statement calling the video “disturbing” and condemning the words used in it.

In the two-minute video from an April event, two young girls are shown reading. One says, “We will sacrifice our souls without hesitation, we will chop off their heads” and liberate the Al-Aqsa Mosque in Jerusalem.

Children in Philadelphia Muslim Society: We Will Sacrifice Ourselves for Al-Aqsa; Will Chop off Their Heads, Subject Them to Eternal Torture pic.twitter.com/6ySfz0Ylel

Tensions erupted in late February over Israel’s closure of a building at the flashpoint Jerusalem holy site , revered by Jews as the Temple Mount and by Muslims as the Noble Sanctuary. The walled compound, home to the Al-Aqsa Mosque and the golden Dome of the Rock, is the third-holiest site in Islam and the holiest site of Judaism.

The video also shows children gesticulating to a song known as the “revolutionaries’ anthem,” often played by Islamist groups. The song says “those who do not accept oppression should assert themselves” and “the path to Al-Aqsa calls us.”

Hammous emphasized that the Muslim American Society has no organizational link to international groups, including the Muslim Brotherhood, an Islamist movement whose supporters sometimes advocate for violence.

Children Singing in Philadelphia Muslim Society: We Will Be Martyred on Palestine's Soil as Fedayeen (Archival) pic.twitter.com/Yy1AULlzLJ

The Philadelphia chapters of the Council on American-Islamic Relations and the Anti-Defamation League also condemned the words used in the video. Iftekhar Hussain, chairman of the council chapter, said Islamic tradition “categorically rejects either speech or actions that harm in any way our Jewish brothers and sisters.” The ADL says that children should not be indoctrinated to hate because “the only chance for a peaceful future is to teach our children to pursue peace.”

The school that organized last month’s event is a separate entity that rents space, Hammous said. He said he couldn’t immediately recall the school’s name, referring to it as a local leaders’ academy.

The Muslim American Society asked the school board to dismiss the person in charge of the program, which it did, Hammous said. He said he’s “evaluating” the leadership of the Philadelphia chapter because they failed to provide proper oversight, but could not say yet whether anyone would be removed.

Hammous said he’s also reviewing the organization’s social media policies, which the posting of the video violated, and bolstering training in Philadelphia. Future events at the Philadelphia chapter will have strict oversight by the Muslim American Society, even when they’re organized by another entity, he added. The chapter’s Facebook page was viewable early Sunday, but appears to have since been disabled.