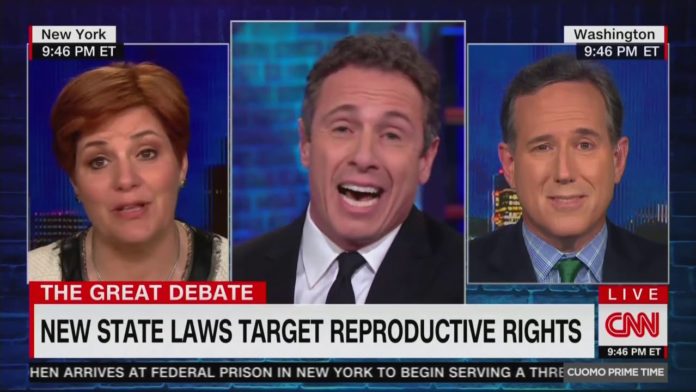 During a discussion about state-level “heartbeat bills,” which prohibit abortion after a fetal heartbeat can be detected, Quinn claimed: “When a woman gets pregnant, that is not a human being inside of her. It is part of her body, and this is about a woman having full agency and control of her body and making decisions about her body and what is part of her body with medical professionals,” Quinn said. “Those are the facts and that is the law.”

Santorum replied: “So the baby is their property and they can do whatever they want to it. They can maim the baby or torture the baby.”

Satorum said he was “not desperate. I’m just asking questions.”

When Santorum asked Cuomo if he disagreed “that at the moment of conception that a child is human and alive?” Cuomo replied that means it’s “viable.” When Santorum asked, “Is it biologically a human life?” Quinn shouted, “No!”

[HORROR: Virginia Governor Says It’s Okay to Kill a Baby AFTER IT IS BORN]