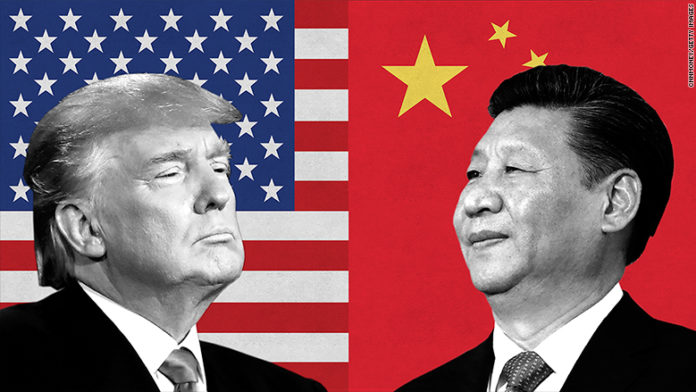 President Donald Trump launched a furious and highly personal Twitter attack Friday against the Federal Reserve and Chairman Jerome Powell, fuming that the Fed once more “did NOTHING!” and wondering who is “our bigger enemy” — Powell or China’s leader.

The outburst came after Powell, speaking to central bankers in Jackson Hole, Wyoming, gave vague assurances that the Fed “will act as appropriate” to sustain the nation’s economic expansion. While the phrasing was widely seen as meaning interest rate cuts, he offered no hint of whether or how many reductions might be coming the rest of the year.

Powell had barely finished speaking before Trump escalated his criticism of the Fed, which he has repeatedly accused of keeping rates too high. For months, the president has ridiculed Powell, the man he picked to lead the Fed.

“As usual, the Fed did NOTHING!” Trump tweeted, adding, “We have a very strong dollar and a very weak Fed.” He went further by saying: “My only question is, who is our bigger enemy, Jay Powel (sic) or Chairman Xi?” — a reference to China’s President Xi Jinping.

…Additionally, the remaining 300 BILLION DOLLARS of goods and products from China, that was being taxed from September 1st at 10%, will now be taxed at 15%. Thank you for your attention to this matter!

….Sadly, past Administrations have allowed China to get so far ahead of Fair and Balanced Trade that it has become a great burden to the American Taxpayer. As President, I can no longer allow this to happen! In the spirit of achieving Fair Trade, we must Balance this very….

While the “enemy” remark appeared to elevate Trump’s attacks on the Fed to a new level, Fed officials meeting in Jackson Hole sought to play down the comment.

Fed Vice Chairman Richard Clarida said he had been too busy attending the conference to even look at Trump’s tweets. He said the Fed planned to keep doing its job of pursuing low unemployment and stable prices in spite of Trump’s criticism.

“This is an institution created by the Congress more than 100 years ago,” Clarida said in a CNBC interview. “We have a very clear assignment from the Congress. … We are just focusing on doing our job.”

….all deliveries of Fentanyl from China (or anywhere else!). Fentanyl kills 100,000 Americans a year. President Xi said this would stop – it didn’t. Our Economy, because of our gains in the last 2 1/2 years, is MUCH larger than that of China. We will keep it that way!

….better off without them. The vast amounts of money made and stolen by China from the United States, year after year, for decades, will and must STOP. Our great American companies are hereby ordered to immediately start looking for an alternative to China, including bringing..

Many private economists have expressed growing alarm about Trump’s criticism of the Fed as an intrusion on its independence and a threat to its credibility.

“This challenges something that has been sacred in the history of the world’s most successful central bank,” said Jones, an economist and author of four books on the Fed. “The central banks that have been successful are those which are independent of political pressures and were free to make the appropriate monetary policy.”

….My only question is, who is our bigger enemy, Jay Powell or Chairman Xi?

Powell’s speech came on a day of fast-moving events in the financial world and a sharp escalation in the trade dispute with China that threatens to tip a weakening global economy into recession.

China announced a new round of tariffs on U.S. products earlier in the day, and Trump responded with higher duties on certain Chinese goods.

He also declared on Twitter that he had “hereby ordered” American companies with operations in China “to immediately start looking for” other places in which to do business.

“Our Country has lost, stupidly, Trillions of Dollars with China over many years,” he said. “They have stolen our Intellectual Property at a rate of Hundreds of Billions of Dollars a year, & they want to continue. I won’t let that happen!”

Markets in the U.S., Asia and Europe tumbled, with the Dow Jones Industrial Average dropping 623 points.

In his speech in Jackson Hole, Powell said Trump’s trade wars have complicated the Fed’s ability to set interest rates and have contributed to a global economic slowdown.

Last month, the Fed cut rates for the first time in a decade, and financial markets appear to be expecting more such steps this year. Trump has argued for a full percentage-point reduction in the coming months — a step most economists consider excessive.

The president contends that lower rates in other countries have caused the dollar to rise in value and thereby hurt U.S. export sales. Earlier in the week, he told reporters, “If the Fed would do its job, you would see a burst of growth like you have never seen before.”

Powell has said that the White House criticism has had no effect on the Fed’s deliberations over interest rate policy.

Trump has insisted in the past that he could fire Powell if he wanted to — an assertion that most experts regard as dubious at best. No Fed chairman has ever been removed by a president.

The law creating the Fed says its officials and those of other independent agencies can be “removed for cause” by a president. While that issue has never arisen in regard to a Fed official, the courts ruled decades ago that “for cause” means more than a policy disagreement with a president.