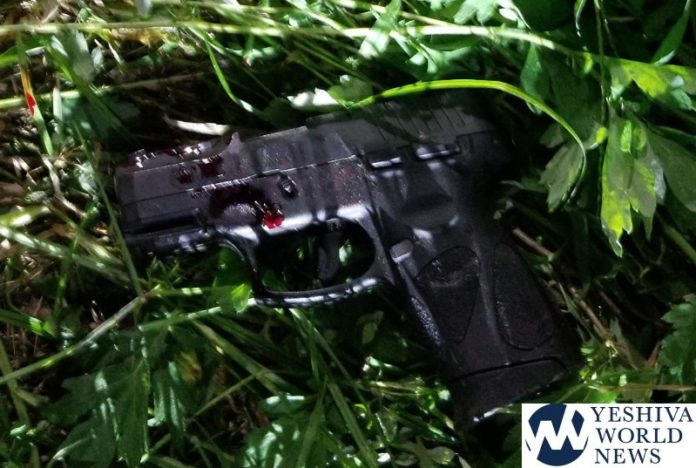 New York City police say a man was killed in a shootout with officers in Brooklyn.

NYPD Chief of Department Terence Monahan said at a news conference that three officers in a patrol car early Monday saw a masked man, who fled when they tried to speak to him.

The masked man fired “numerous rounds” at the pursuing police car and then exchanged gunfire with one officer who had exited the car beforehand. The man fled, but police received a report 30 minutes later about a man trying to break into a nearby backyard.

In the backyard, six more officers exchanged gunfire with the man, who was taken into custody and pronounced dead at a hospital. The man’s identity hasn’t been released.

THE FOLLOWING ARE REMARKS BY NYPD CHIEF OF DEPARTMENT:

Good morning, I’m Chief Terry Monahan. With me is Assistant Chief Jeff Maddrey, Commanding Officer of Patrol Borough Brooklyn North, Deputy Chief Michael Kemper, Commanding Officer of Brooklyn North Detectives, and Captain Craig Edelman, the 73 Precinct Commander.  Before I give a briefing on this morning’s police-involved shooting, I want to remind everyone that the information I’m going to provide is preliminary as the investigation is ongoing.

Earlier this morning, at approximately 2:36 a.m., officers in uniform assigned to the 73 Precinct were patrolling the area of Howard Avenue and Dumont Avenue when they observed a suspicious male wearing a mask covering his face. When the 3 officers who were inside their patrol car attempted to speak to the man he immediately fled toward 788 Howard Avenue one officer exited the vehicle and the other two drove onto Howard Avenue,the perpetrator fired numerous rounds at the  their vehicle, striking it. The officer who exited the car then exchanged gunfire with the male. However, the perpetrator fled from the officers.

Approximately 30 minutes later, a resident alerted additional officers that a man was attempting to break into a backyard on Howard Avenue.

As uniformed patrol officers gained entry to the backyard they were fired upon numerous times and exchanged gunfire with the perpetrator. These officers became pinned down at the location due to the perpetrator firing. Additional officers, including Emergency Service Unit, also made entry into the backyard area where rounds continued to be fired by the man. Our officers return fire and the man was then taken into custody.

The male was taken to Brookdale Hospital where he was pronounced deceased. A semi-automatic handgun was recovered from the scene.

The great work by our cops today demonstrates, once again, how they never hesitate to go into harm’s way to keep our city safe.