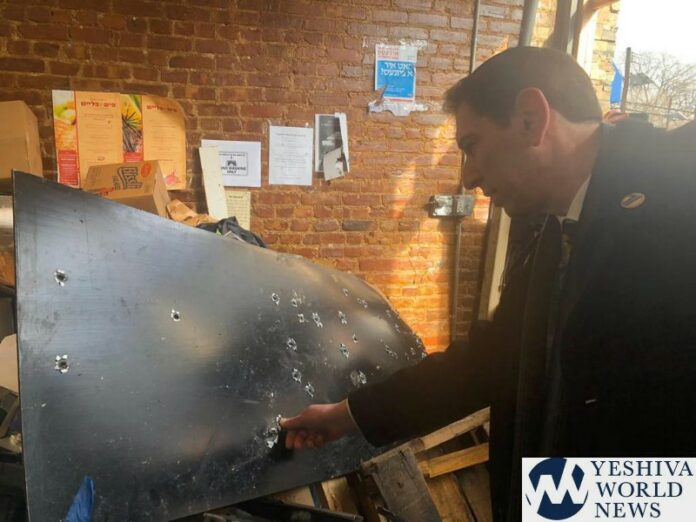 It was cold in Jersey City on Wednesday, but it seemed like the whole neighborhood was standing outside. As I walked down the road towards the grocery store, the first thing that struck me was the eerie silence. With no traffic sounds, the comments people were whispering were easily heard. “We lit you up yesterday,” cackled one man gleefully, before ducking into a store. Later, I wondered if people make hateful comments about my obvious Jewishness every time I walk down the street, but the bustle of New York City swallows it up.

For Jews around the world, and particularly in the tri-state region, the last week has felt like a really awful nightmare. The Jersey City shooting has left us shaken to our core as a community, an example of the most vile anti-Semitism we could conceive of. The notion that our people can be targeted doing the most mundane of daily activities is terrifying. The idea that 50 of our young boys were sitting in classrooms right next door to a massive, anti-Semitic domestic terror attack is chilling.

There was no door through which I could enter the JC Kosher Supermarket. I stepped over debris to get inside. There was something truly devastating about seeing a package of Stern’s rugelach – the kind our children eat for their school snack – lying amid blood and bullet holes on the floor. As my shoes crunched over the broken glass, my mind flashed back to stories of Kristallnacht, the night of violence that beget the Holocaust.

You’ve seen me write about hate crimes and anti-Semitism in these pages many times. With grave concern, I’ve joined with other Jewish community leaders in sounding the alarm about rising hatred in Brooklyn. Every step of the way, we begged for officials to hear us. We begged the mainstream media to pay attention. We warned that things will only get worse if we don’t tackle this hate head-on.

It’s impossible to fight anti-Semitism without naming it. I never understood that more than I do now, with the knowledge of what occurred in the past week. When I stepped into the sunlight on the street in front the JC Kosher Supermarket, there was a reporter waiting for me. He asked me if I thought this shooting was a result of gentrification. Later that day, a prominent national newspaper tweeted that the shooting shook “a historically black neighborhood where an ultra-Orthodox Jewish community has recently taken root.”

With the streets of Jersey City still dripping with Jewish blood, out came the media, telling us WHY people hate us enough to kill us. Can you imagine the (rightful!) outrage if media asked Muslim leaders why people hate them, minutes after the mosque shooting in New Zealand that claimed the lives of more than 50 people; or if they asked black leaders why people hated them, immediately after nine African-American lives were taken in a church in Charleston?

One thing I do know is that maintaining the status quo is certainly not the answer. We must vigorously pursue fair and honest headlines that do not obfuscate anti-Semitism. We must not be silent when officials tell us that we are making a big deal out of a small problem. We must demand unequivocal condemnation of baseless hatred against ourselves and others.

I walked quickly back to the car after leaving the scene at JC Kosher Supermarket. This time though, when I heard the sneers and quiet cursing from locals, I could not pass in silence. I approached a group of young people with a smile and I opened a conversation. We spoke for a while about bias and hatred. They have experienced racism as black Americans, and I drew comparisons between their struggles and ours. As I walked away a half hour later, I overheard one of those kids say to a passing Misaskim volunteer, “I’m sorry for your loss, we support you.”

As I write this, I see a video circulating of the Jersey City cheder children returning to school, joyously singing and dancing as they thank Hashem for protecting them from danger. During this frightening time, we must put all of our faith and trust in Him. May the neshamos of our fallen brother and sister have an aliyah.