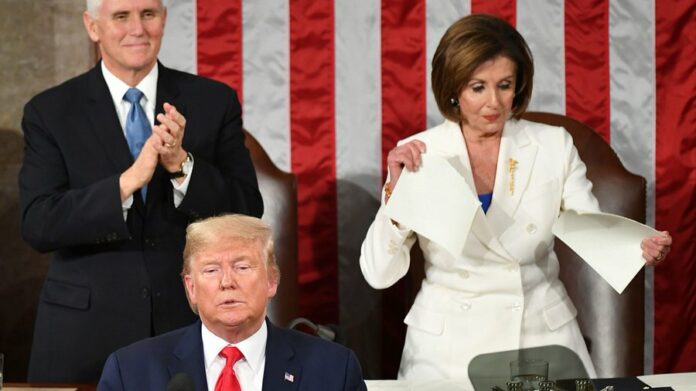 Stepping to the dais in extraordinary times, President Donald Trump on Tuesday delivered his State of the Union address on the eve of his likely impeachment acquittal and in the aftermath of the chaotic first votes of the race to replace him.

The first president to run for reelection after being impeached, Trump used his nationally-televised speech to lay out his record as the rationale for a second term amid suspense about whether he would address the charges against him.

At the start of the State of the Union address Tuesday it appeared that Pelosi extended her hand to Trump, a gesture amid the divisive impeachment proceedings.

The president was presenting folios to Pelosi and Vice President Mike Pence as he arrived for the evening speech when it appears she reached for the shake. At the same time, Trump turned away from her to face the audience of lawmakers gathered for the annual address.

The speaker led House Democrats in impeaching Trump last month on charges he abused power and obstructed Congress in the Ukraine matter. The Senate is poised to acquit him Wednesday of the two articles of impeachment.

President Donald Trump announced the award during his State of the Union address Tuesday night. First lady Melania Trump presented the award to Limbaugh. The two sat next to each other in the House visitors’ gallery. A bearded Limbaugh stood and saluted President Trump as the award was announced.

Trump said the diagnosis was not good news, but added: “What is good news is that he is the greatest fighter and winner that you will ever meet.″

Trump thanked Limbaugh for “decades of tireless devotion to our country” and said the award recognized the millions of people a day Limbaugh speaks to and inspires, as well as his charity work.

No sooner did President Donald Trump finish his State of the Union address then House Speaker Pelosi ripped it in two. Right there, on the dais behind him.

Trump was barely done, turning to greet the crowd of lawmakers Tuesday night, when Pelosi, without a moment’s delay, turned the papers in her hand.

And then she took some more pages.

And she ripped again.

Asked by ABC why she did that she said because it was “a courteous thing to do considering the alternative. It was such a dirty speech.”

One of our last surviving Tuskegee Airmen.

The survival of a child born at 21 weeks.

The mourning families of Rocky Jones and Kayla Mueller.

A service member's reunion with his family.

Among the made-for-TV moments in President Donald Trump’s State of the Union speech: The military husband of one of Trump’s guests returned home from deployment and surprised his family.

Amy Williams, from Fort Bragg, North Carolina, was in attendance Tuesday night with her two children, 6-year-old Elliana and 3-year-old Rowan. Trump told the crowd that Williams works full time and volunteers helping military families. Over the past seven months, her husband, Sgt. 1st Class Townsend Williams has been deployed to Afghanistan, his fourth trip to the Middle East.

Trump thanked her, then told her he had a surprise: Her husband had returned from deployment and was at the Capitol. Sgt. Williams walked down the stairs in his uniform to greet a shocked Amy Williams, and he hugged his children. He then hugged his wife.