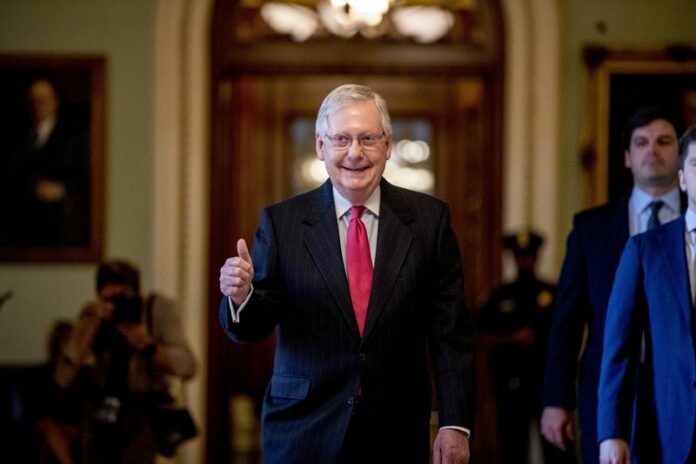 The White House and Senate leaders announced agreement Wednesday on an unparalleled, $2 trillion emergency bill to rush aid to businesses, workers and a health care system slammed by the coronavirus pandemic.

It’s the largest economic rescue bill in history. The package is intended as a weekslong or monthslong patch for an economy spiraling into recession or worse and a nation facing a grim toll from an infection that’s killed nearly 20,000 people worldwide.

Underscoring the effort’s sheer magnitude, the bill finances a response with a price tag that’s half the size of the entire $4 trillion annual federal budget.

“A fight has arrived on our shores,” said Senate Majority Leader Mitch McConnell. “We did not seek it, we did not want it, but now we’re going to win it.”

They said passage of the legislation was expected in the Republican-led Senate by the end of the day. After a banner day on Tuesday as the package took shape, the stock market rallied even more on Wednesday.

That would leave final congressional approval up to the Democratic-controlled House. Speaker Nancy Pelosi, D-Calif., said the bipartisan agreement “takes us a long way down the road in meeting the needs of the American people” but she stopped short of fully endorsing it.

“House Democrats will now review the final provisions and legislative text of the agreement to determine a course of action,” she said.

House members are scattered around the country and the timetable for votes in that chamber is unclear.

House Democratic and Republican leaders have hoped to clear the measure for President Donald Trump’s signature by a voice vote without having to call lawmakers back to Washington. But that may prove challenging, as the bill is sure to be opposed by some conservatives upset at its cost and scope. Ardent liberals were restless as well.

White House aide Eric Ueland announced the agreement in a Capitol hallway Wednesday, shortly after midnight, capping days of often intense haggling and mounting pressure. The wording of some final pieces of the agreement need to be completed.

The sprawling, 500-page-plus measure is the third coronavirus response bill produced by Congress and by far the largest. It builds on efforts focused on vaccines and emergency response, sick and family medical leave for workers, and food aid.

It would give direct payments to most Americans, expand unemployment benefits and provide a $367 billion program for small businesses to keep making payroll while workers are forced to stay home.