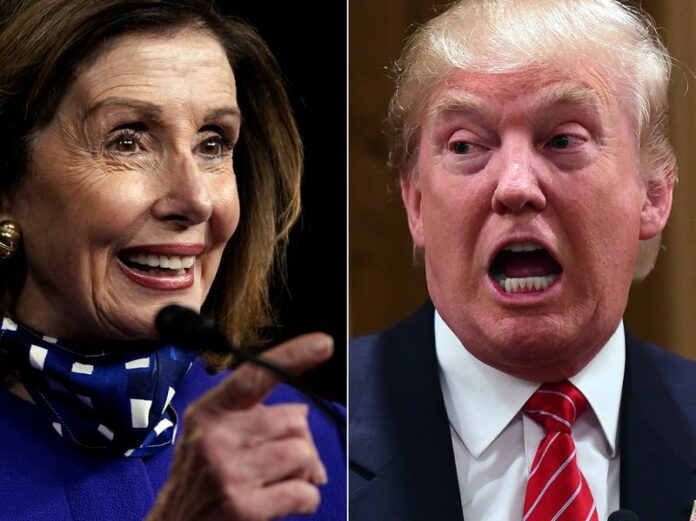 House Speaker Nancy Pelosi on Tuesday called on President Donald Trump to be a “healer in chief” and not a “fanner of the flame” as the nation reels from mass protests over the treatment of black people in the United States.

Pelosi, reading from Bible scripture at the Capitol, drew on past presidents — including George H.W. Bush speaking in the aftermath of the Rodney King unrest and Barack Obama following the death of Eric Garner — as models of the nation’s chief executive at a time of crisis.

“We would hope that the president of the United States would follow the lead of so many presidents before him to be a healer in chief and not a fanner of the flame,” Pelosi said.

The remarks of the party’s highest-ranking official stood in stark contrast to the Republican president as Democrats overwhelmingly criticized the use of force to disperse the crowd of protesters late Monday at the White House so Trump could visit nearby St. John’s church in what was widely seen as a campaign photo opportunity.

As the world watches a nation in turmoil, Democrats are swiftly preparing investigations and a legislative response to the police violence and racial inequality at the heart of the protests erupting in communities nationwide.

“Some people came out and beat them so they could clear the area so the president could come out and go forward. What is that?” asked Pelosi. “That has no place and it’s time for us to do away with that.”

More than 40 bills — from banning police choke holds and racial profiling to preventing the federal transfer of military equipment to local law enforcement to a long-sought federal anti-lynching law — are now under consideration on Capitol Hill.

Senate Democratic Leader Chuck Schumer called on Defense Secretary Mark Esper and Army Gen. Mark Milley, the chairman of the Joint Chiefs of Staff, to refuse allowing the use of military helicopters and tear gas on protesters in Washington, D.C., and elsewhere.

The chairman of a House subcommittee on government operations, Rep. Gerry Connolly, D-Va., sent a letter demanding answers from the Secret Service about its role in what he called an “unwarranted attack” on peaceful demonstrators. Connolly said he also is seeking communications related to possible orders given by Trump regarding the use of force against protesters.

Majority Leader Steny Hoyer, D-Md., said House lawmakers could be recalled to Washington as soon as this month for a vote on legislation to address police violence and confront the inequities facing black Americans.

“Our nation needs a calm and steady leadership, a sure hand and a big heart, qualities that President Trump has never displayed in office,” Schumer said as the Senate opened Tuesday.

At the partly closed Capitol, a Congress that has already struggled with the COVID-19 outbreak is now confronting a deepening crisis after the death of George Floyd during a police stop in Minnesota.

The civil unrest over the death of Floyd at the hands of police combined with the coronavirus pandemic that’s disproportionately striking African Americans sparked an urgent plea for understanding from some leaders.

Pelosi, a Catholic who regularly attends Mass, said there were so many passages that Trump could have relied on during his visit to the church. He held up a Bible during the event but did not refer to it during brief remarks. She quoted from the book of Ecclesiastes, saying it is a “time to heal.”

“It is the responsibility of all of us to take the time to heal,” she said.

As protesters gathered this outside the Capitol, still partly locked down due to the coronavirus, the dual crises tested Washington.

There was a shift in tone as even some conservatives who in the past have countered “Black Lives Matter” protests with “Blue Lives Matter” support for law enforcement acknowledged the concerns.

Yet, some Trump allies pushed for a show of military action to quell the protests now stretching into their sixth day.

Sen. Tom Cotton, R-Ark. He suggested bringing in the 101st Airborne — an elite Army unit — to confront outside agitators influencing the protests.

Trump’s remarks focusing on the possibility of using the military in response to violent protests, coming as military police and law enforcement clashed with protesters near the White House, were widely criticized. Rep. Jason Crow, D-Colo., a former Army Ranger who served in Iraq and Afghanistan, said: “These are not the actions of a rationale, fit, democratic president. They are the actions of a man who doesn’t respect the core values of our nation.”