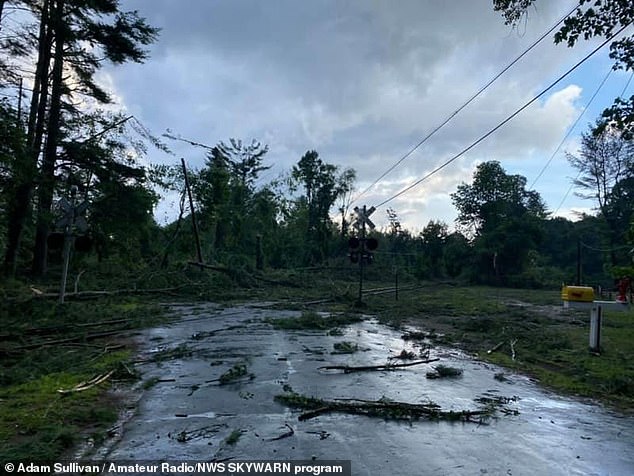 National Weather Service teams have confirmed that tornadoes touched down in southern Connecticut and in the suburbs north of New York City and uprooted and snapped trees during Thursday’s storms that caused power outages for tens of thousands of residents.

A National Weather Service survey team says a tornado that reached maximum wind speeds of 110 mph (177 kph) first touched down in a forested area in Bethany, Connecticut, before snapping hardwood trees and damaging the roofs of several homes as it moved toward Lake Bethany.

That tornado picked up intensity as it tore apart the roof of a two-story building near Hamden Town Hall and reached maximum strength in North Haven, Connecticut.

And weather surveyors say another tornado touched down in the village of Montgomery – about 80 miles (130 kilometers) north of New York City – on the northwest side of the Orange County Airport near Wallkill River. Two airport buildings saw minor structural damage as the tornado snapped and uprooted large trees and ended after reaching a maximum wind speeds of 90 (145 kilometers) miles per hour.

The storms came three weeks after Tropical Storm Isaias caused widespread damage and power outages. Government officials and customers have blasted utilities for taking over a week to restore those outages, and state regulators are now investigating.