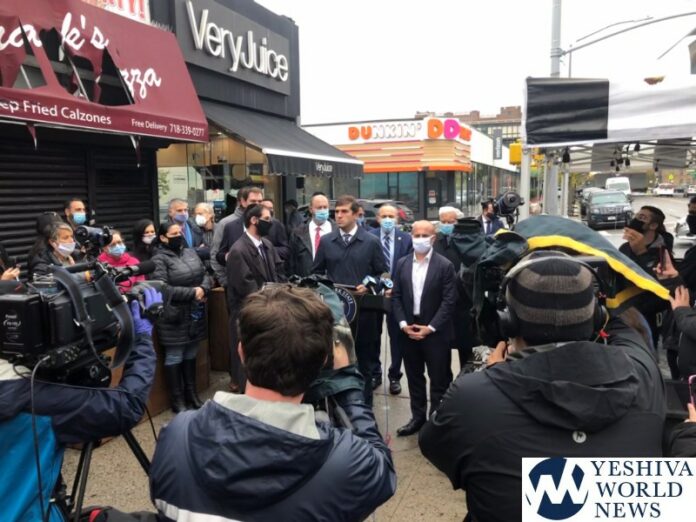 The group of leaders condemned the rise of antisemitism and hatred across the country. In 2019, the ADL found that antisemitic incidents had hit an all-time high. The hateful vandalism was found on the day of the two-year anniversary of the shooting at the Tree of Life synagogue in Pittsburgh.

“As we have seen from the rise in violent antisemitic incidents in recent years, rhetoric has consequences. We need to stand up, speak out and show that we will not allow hatred to fester unchecked, whether in the form of hateful vandalism at a beloved small business, online or a Proud Boys banner unfurled over Bay Ridge. Hate has no place in Brooklyn or in our neighborhoods. Today, I am in solidarity with the Jewish community in denouncing the vile and disgusting vandalism,” said State Senator Andrew Gounardes.

“The Jewish community has gone through far too much in the past few years,” said Congressman Max Rose, a Jewish Army combat veteran. “From an onslaught of violence last winter to the desecration of the Shore Parkway Jewish Center earlier this month, to the disgusting, reprehensible and anti-Semitic vandalism scrawled on this business. We must always unite as a community and stand against those who would seek to harm us, divide us, and incite hate. And we must continue to call for action, not words, until every community in New York feels safe in this city.”

“Hatred directed at Jewish people and any other group has no place in our community and will not deter us from our larger mission of increasing tolerance and understanding among all who live and work here,” said Assemblyman Steven Cymbrowitz (D-Brooklyn).

“Just yesterday, we commemorated two years since the devastating “Tree of life” synagogue massacre that killed eleven of our Jewish brethren. Since then, we have seen steadily rising hate crimes numbers across the country and the world, but particularly here in New York City. Antisemitic graffiti isn’t just about graffiti – it’s a symptom of the hatred and bigotry that feels overwhelming at times here in Brooklyn. Whether it is violent assaults, disgusting vandalism, or even governmental policies, we cannot and will not be silent,” said Councilman Chaim Deutsch.

“I’m disgusted by this vile hatred. I’m disgusted that our beautiful community would be targeted with this vicious act. Antisemitism is not a new disease, but it is so clear that it is spreading, in no small part due to the harsh and dangerous light being shined on our community by the highest levels of government,” said Councilman Kalman Yeger.