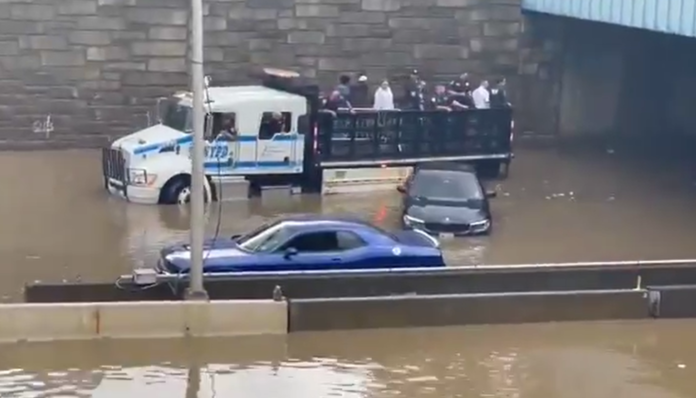 Some New York City roadways and at least one subway station temporarily became bodies of water on Thursday, after a deluge of rainfall flooded traffic lanes and station platforms.

In one video, an intrepid woman climbed down the stairs of a station and waded through the dark, murky water with a bag on her shoulder and another held above her head. In another video, a group attempted to cross the water by hopping through it in garbage bags.

The water issues weren’t just below ground, either.

This is the Major Deegan Expressway in NYC after a vicious downpour a short while ago. pic.twitter.com/cJVYGsiTAo

Some drivers on the Major Deegan Expressway in the Bronx needed emergency assistance after becoming stuck when the water got too deep on one side of the roadway.

On the other side, drivers had to pass the area only using one lane, with the others covered by brownish water.

The FDR Drive in Manhattan also had severe flooding issues in some sections.

The heavy thunderstorms came as the region was bracing itself for the arrival of Tropical Storm Elsa on Friday as it makes its way up the East Coast. The storm killed one person in Florida and created conditions that injured several others in Georgia.