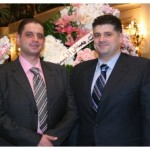 Raising money to fund anti-Israel ads to protest against the Government of Israel, has led the Satmar Rebbe (Reb. Ahron) to meet with two Muslim billionaires, the brothers of the Hani-Al-Kassab family in UAE, who own giant companies in Dubai and oil fields in the Emirates .

According to a report in Behadrei Haredim, the two brothers came to the U.S. to explore joint investments with some Orthodox Jewish partners.

The brothers, who came across Satmar’s advertisements against Netanyahu, were curious to learn more about Satmar’s ideological opposition to the State of Israel. The Jewish partner referred them to Rabbi Chaim Tzvi Teitelbaum, the grandson of the Satmar Rebbe in Kiryas Yoel, to request a meeting with the Rebbe.

The Rebbe expressed his willingness to meet with them, claiming it would sanctify God’s name.

“Why are you against the state of Israel?” they questioned the Rebbe, during a 15 minute meeting.

“The Zionists do not speak on behalf of the nation of Israel and are not their representatives,” the Rebbe responded unequivocally. “We did not recognize them as a Jewish state, and as a direct result, we do not even visit the Western Wall (Kotel) – the holiest place for the Jewish people – or the rest of Israel’s occupied land. We have no connection to the State of Israel and we would never offer a helping hand to support the government.”

The Rebbe also told his guests that he has no relationship with the Shas party in Israel. “Just the opposite,” he said. “We fight against them and Agudath Israel because we have no part in anything designed to establish the Zionist state and its government. “

“It does not matter if the state is led by a religious or secular leader. The problem is the State known as Israel,” he added.

“Does this mean Satmar sides with the Arabs?” the two continued to press.

“Our opposition to Israel is not due to political considerations, but a biblical prohibition to found a Jewish State in the land of Israel before the redemption,” the Rebbe explained. ”The State of Israel is a big contradiction to the Jewish religion and to our real hopes. So, even if the day comes and the Israelis sign a peace agreement with the Arab world, our opposition to Israel will stand. ”