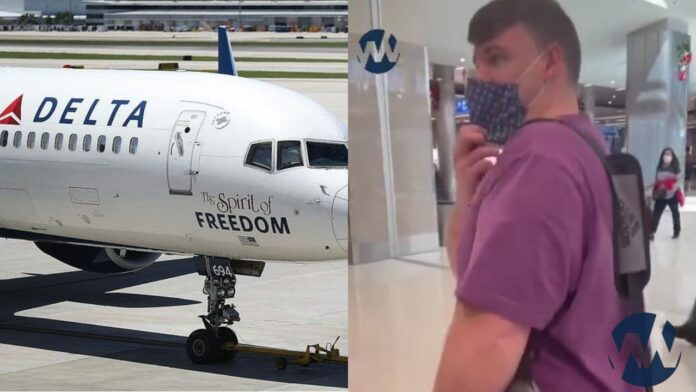 A Jewish couple traveling to Miami were accosted and cursed at by an anti-Semite as they disembarked from their aircraft.

Victoria Zirkiev, the producer for Israeli music star Gad Elbaz, and her husband were traveling to the Sunshine State for business when the incident occurred.

She says that as they were waiting in line to disembark from the plane, her husband lowered his mask for a moment to catch his breath, as the plane had become very hot.

Immediately as he pulled his mask down, a man in his 20’s yelled at him to put his mask back on. Not wishing to make a scene, the Jewish man politely pulled the mask up again.

But the anti-Semite wasn’t finished with them.

As the Jewish couple entered the terminal, they removed their masks – as they are legally allowed to – and the man went after them again, saying, “why don’t you put your masks on, you [expletive] Jews!”

The anti-Semite then began to physically assault the Jewish man, shoving him, prompting a response from the couple, who both began fighting back against the hate-filled aggressor, forcing him to back off.

He continued to accost them through the airport, berating them for removing their masks.

“This is America, not Nazi Germany. Unfortunately, anti-Semitism is alive and well,” Victoria said.

“Jews get blamed for everything. My parents left their country to escape anti-Semitism, on for their children to experience it in America.”