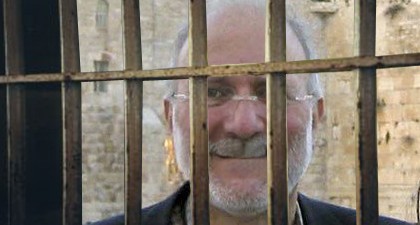 Alan Gross, 64, a Jewish U.S. citizen who is marking four years in prison in Cuba, has written a letter to President Barack Obama asking the president to get personally involved in securing his release.

At a vigil Tuesday in front of the White House, Gross’ wife, Judy Gross, urged the president to help obtain her husband’s release “Please Mr. President, don’t leave Alan to die in Cuba,” she appealed.

Judy Gross also read a letter sent by Alan from his prison cell, to the crowd assembled outside the White house. “It is clear that the President and his Administration are busy with other serious domestic and world crises… But it has been four years since I was imprisoned for acting in the service of my country. I am waiting here in real time, in my cell 23 hours a day, unable to help my family or to participate in their lives,” Alan wrote. “I am only one man, but I am a citizen of the greatest country on earth, a country I was serving in my work in Cuba, and I must believe ‐ I do believe ‐ that my country will not leave me behind.”

“There are countless Americans all over the world, some serving in uniform, others serving in diplomatic or civilian capacities, still others private citizens studying or traveling abroad, and they must not harbor any doubt that if they are taken captive in a foreign land, our Government will move heaven and earth to secure their freedom. It will be a tragedy if my continuing imprisonment causes even one of them, particularly those serving our country overseas, to question this fundamental point,” he further noted.

“I have thought long and hard about what it will take to bring me home. Only the President of the United States has the power to accomplish this. On behalf of my family and myself, on behalf of every American who might ever find himself or herself in trouble abroad. I ask President Obama to direct his administration to take meaningful, decisive steps to secure my immediate release,” Alan pleaded. “Please, Mr. President, please assure my family and me that you will do whatever is necessary to get me out of this hell. I am fired up and ready to go home. Please do whatever is necessary to keep that fire from being extinguished. And to anyone listening to my words, please make certain that President Obama recognizes the need to take decisive and appropriate action to save my life and my family’s future, understanding that this situation is not only about me.”

The State Department on Monday called on the Cuban government to release Gross. In late November, 66 senators led by Sen. Patrick Leahy, D-Vt., sent Obama a letter asking him to “act expeditiously to take whatever steps are in the national interest” to obtain Gross’ release.