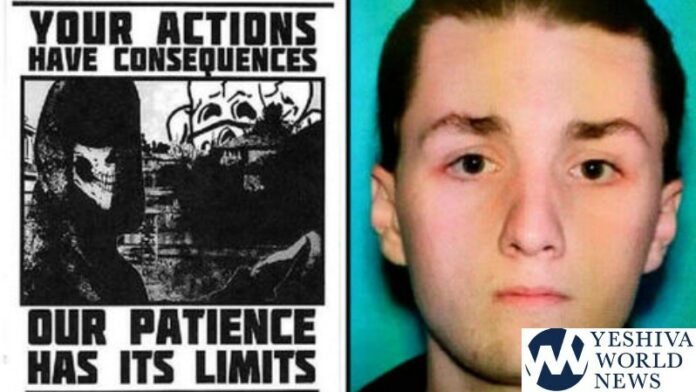 A Washington man was sentenced today to 84 months, or seven years, in prison for his role in a plot to threaten and intimidate journalists and advocates who worked to expose anti-Semitism.

Kaleb Cole, 25, a leader of the Neo-Nazi group Atomwaffen Division, was convicted by a federal jury in the Western District of Washington of one count of interfering with a federally protected activity because of religion, three counts of mailing threatening communications, and one count of conspiring with other Atomwaffen members to commit three offenses against the United States – interference with federally-protected activities because of religion, mailing threatening communications, and cyberstalking.

Evidence introduced at trial showed that Cole and other members of Atomwaffen plotted to intimidate journalists and others by mailing threatening posters or gluing the posters to victims’ homes. The group focused primarily on those who are Jewish or journalists of color. Cole created the posters, which warned the recipients that “you have been visited by your local Nazis.”  The posters contained threatening images, such as a hooded figure preparing to throw a Molotov cocktail at a house. The threatening posters were delivered to homes in late January 2020.

At trial, the victims described how receiving the posters impacted them. Some moved from their homes for a time or installed security systems. One purchased a firearm and took a firearms safety class. Another started opening her mailbox with a stick due to fear of what might be inside. One left her job as a journalist.

Threats motivated by religious intolerance are antithetical to American values, even more so when they aim to intimidate journalists and others who are working to expose bigotry in our society.” said Assistant Attorney General Kristen Clarke of the Justice Department’s Civil Rights Division. “The defendant led a multi-state plot by a neo-Nazi group to threaten and intimidate journalists and advocates who were doing important work to expose anti-Semitism around the country. The Justice Department will continue to investigate and prosecute these hateful acts.”

“Kaleb Cole helped lead a violent, nationwide neo-Nazi group,’” said U.S. Attorney Nick Brown for the Western District of Washington. “He repeatedly promoted violence, stockpiled weapons, and organized ‘hate camps’. Today the community and those Mr. Cole and his co-conspirators targeted, stand-up to say hate has no place here. He tried to intimidate journalists and advocates with hate-filled and threatening posters, tried to amplify their fear. Instead they faced him in court and their courage has resulted in the federal prison sentence imposed today.”

“The defendant sought to intimidate journalists and advocates working to expose anti-Semitism, but that effort failed,” said Assistant Director Timothy Langan of the FBI’s Counterterrorism Division. “Cole’s intended victims fought back but not with threats of violence; they fought back in a court of law. The FBI will continue to do our part by aggressively investigating cases involving threats or acts of violence.”