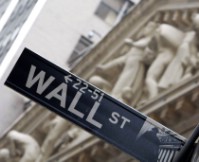 Financial firms are leading a rally on Wall Street, as investors digest both the government’s plan to help banks remove as much as $1 trillion in bad assets from their books, and news of a surprise increase in home sales.

Major stock indexes jumped as much as 4 percent, including the Dow Jones industrial average, which was up about 300 points in afternoon trading.

Bank stocks have been at the heart of the market rally over the past two weeks. They extended their gains Monday after the Treasury Department announced a plan to revive lending that would rely on the government’s $700 billion financial rescue fund, the Federal Reserve and the Federal Deposit Insurance Corp., as well as private investors.

CBS News senior White House correspondent Bill Plante reports that the idea behind the new White House plan is to use a combination of government and private funds to buy up bad debts from the banks to free up credit, so they will start lending to private citizens and businesses again.

Banks have curbed lending as they try to weather losses from souring loans, including mortgages. Investors are hoping the government’s plan to buy toxic assets that are weighing on banks’ balance sheets will lead to more normal lending to consumers and businesses. (The drop in lending has worsened and prolonged the recession.)

The plan seeks to draw in private investors, including big hedge funds, to participate by offering billions of dollars in low-interest loans to finance the purchases. The government will share the risks if the assets fall further in price.

“The actions that we’re getting from a policy standpoint are very helpful in removing the sand from the gears,” said Alan Gayle, senior investment strategist at RidgeWorth Investments. “That is going to be good for the financials.”

Monday’s advance is bolstering a more upbeat mood on Wall Street seen in the past two weeks. Stocks began rising after troubled banks told investors they had made money in the first two months of the year and after reports on retail sales and home building came in better than expected. The Dow made back-to-back weekly gains for the first time in almost a year.

The KBW Bank Index, which tracks 24 of the nation’s largest banks, is up 10.3 percent in afternoon trading.

Shares of the country’s largest banks, which have been beaten down in recent weeks over concerns about their ability to weather the crisis, soared on Monday. Citigroup Inc. jumped 17 percent, and Bank of America Corp. added 15 percent.

“The financial stocks and the banking stocks are really on a tear,” Michael Farr, market analyst with Farr, Miller and Washington, told CBS News.

About 10 stocks rose for every one that fell on the New York Stock Exchange, where volume came to 579.2 million shares.

“Investors are somewhat upbeat about prospects for this plan having a positive impact on the economy,” Hugh Johnson, Chairman and CIO of Johnson Illington Advisors, told CBS News.

Johnson told CBS that while he doesn’t read the messages as it being time to completely shift from a somewhat guarded or defensive portfolio to “an all-out, bull market portfolio, but at least we can start to work our way in that direction.”
In The Details

Oil rose $1.28 to $53.35 a barrel and the dollar was mixed against other major currencies. Gold prices fell.

In Europe, shares of Daimler AG were up 1.4 percent, after earlier rising 8.2 percent, following an announcement that Abu Dhabi-based Aabar Investments PJSC will buy a stake in the German automaker and become its biggest shareholder. Aabar’s biggest shareholder is the International Petroleum Investment Co., owned by the Abu Dhabi government.

Investors snapped up some stocks after quarterly results came in ahead of Wall Street’s low expectations.

Drugstore chain Walgreen Co. says its earnings fell 7 percent in the fiscal second quarter because of costs for its restructuring plan even as retail prescriptions grew, bucking an industry trend. Walgreen rose $2.61, or 11 percent, to $26.90.

Jewelry retailer Tiffany & Co. said its fourth-quarter profit plunged more than 75 percent after a steep drop in sales over the holiday season. Tiffany rose $3.07, or 15 percent, to $23.30.