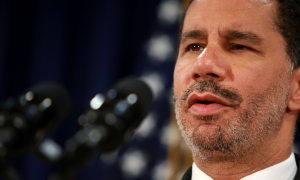 The Siena College poll finds the Democrat viewed favorably by 29 percent of New York voters and unfavorably by 58 percent. That’s worse than last month’s ratings, his lowest since taking over after Eliot Spitzer resigned.

Just 19 percent of New Yorkers say they have a positive view of his job performance. Seventy-eight percent have a negative view.