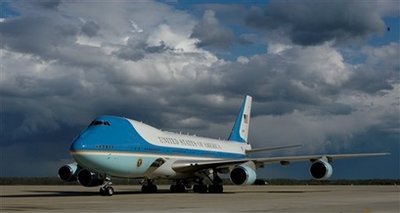 Bloomberg News: President Barack Obama ordered a review of a publicity-photo shoot with one of the planes that serves as Air Force One that cost taxpayers $328,835 and caused a furor in New York City.

$328,835?! Seems just a bit pricey to me – unless it’s found to “stimulate” the economy. For that price shouldn’t bungy jumping be included?

A “publicity photo”? Like on a Chanukah card to Ahmadinejad?

CBS2: The flyover — apparently ordered by the White House Office of Military Affairs so it would have souvenir photos of Air Force One with the Statue of Liberty in the background — had President Obama seeing red. He ordered a probe and apologized.

For that price they could have brought the statue of liberty to the white house. Besides, haven’t the tech savvy white house heard of photo shop?

Now forget about the absurdity of the pricey photo op, what should concern the eco-conscious President is the plane’s large amount of carbon fuels that harm the environment; what good would this picture be if it get swallowed up under the ozone layer!

“It was a mistake. It will never happen again,” President Obama said. Don’t worry, next time they will do it in a much quieter place…..any GM auto plant.