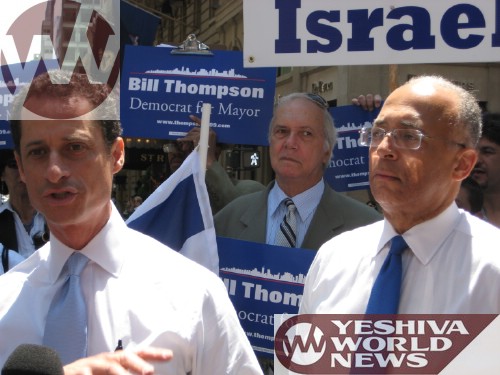 [YWN VIDEO & PHOTO LINKS BELOW] Now that Rep. Anthony Weiner has dropped out of the race for mayor of New York City, he is throwing his support to City Comptroller William Thompson.

Weiner dropped out of the race last week, saying that Mayor Michael Bloomberg’s money makes it impossible to have a fair fight.

Bloomberg has spent more than $18 million on his re-election campaign since January.

But Weiner said Thompson can win because “this town loves an underdog.”

Weiner and Thompson spoke to reporters at Sunday’s Salute to Israel Parade.