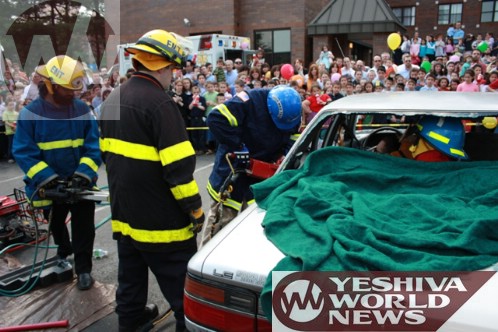 [PHOTO LINK BELOW] On Sunday, June 7, 2009, Hatzolah of Passaic/Clifton EMS and the Bikur Cholim of Passaic-Clifton once again hosted a Health and Safety Fair for the community. The crowd was estimated at 1,500-2,000 people. Attendees had more than 30 booths to browse, relating to their personal health and safety. Hundreds of people received health screenings free of charge, including vision, glucose (blood sugar), dental, scoliosis (spine), blood pressure and more. There were even booths dealing with virtual safety (computer/internet)! Children received balloons and everyone was able to enjoy free healthy snacks- bottled water, fresh fruit and hot popcorn.

Many community doctors as well as representatives from area hospitals attended the fair and afforded participants valuable opportunities to chat informally with them and to discuss miscellaneous health questions and concerns.

Presentations were given on choking prevention, first aid, music and movement for children and other important topics.  Torah Tots and a juggler/cyclist/stilt walker provided lively entertainment for the children.

Aside from all of the colorful balloons and the opportunity to collect many giveaways (in bags provided by Kosher Konnection), the fair had a more serious side as well. Dr. Robert Grunstein was hard at work in his dental rescue mobile, providing over 300 dental screenings for local kids – many of whom have no dental insurance and had never before seen a dentist! Florey Cruz-Cerpa from Mountainside Hospital, who conducted the glucose screenings, reported that several individuals tested had dangerously high glucose levels and at least 2 people were directed straight to the Emergency Room for follow-up. Dr.Yosi Fishkin, the ophthalmologist who provided free vision screens, alerted several participants about vision impairments that needed attention, and was even able to save the day by extracting a piece of hazardous debris from a little girl’s eye!

That’s just what was taking place inside the Bnos Bracha building!  Outside the building there were more themed actiities – and excitement!  Numerous emergency vehicles, including two Hatzolah ambulances, a fire engine, police cars, Passaic County bomb squad, and the Passaic County canine unit were available for touring.  The children of the community learned about the vehicles and the people who operate them in a friendly atmosphere. Kids receive many safety tips from the firemen, policemen, Sheriff’s deputies, and of course, Hatzolah EMTs manning the vehicles.

Additionally, the Passaic Police Department provided car seat checking, in which certified inspectors went over each and every car seat and made sure it was safe and secure.

Highlighting the event was Assemblyman / Passaic City Council President Gary Schaer presenting Hatzolah of Passaic/Clifton EMS and Bikur Cholim of Passaic-Clifton with a New Jersey State Assembly Proclamation thanking the two organizations for all they do for the community.

During the last hour of the event, members of Hatzolah of Passaic/Clifton EMS were joined by many members of Lakewood Hatzalah and their rescue truck as they once again demonstrated to a crowd of over 500 people how a trapped crash victim is safely extricated from a wrecked car, lo aleinu, by keeping the patient safe while removing the vehicle from around him.

Passaic-Clifton hatzolah thanks all of the volunteers from both organizations, the event sponsors, the presenters, all the various local and county officials and most of all the attendees for making this a truly momentous event for the Passaic-Clifton Jewish Community.