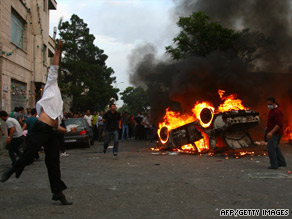 Moussavi has contested the results of Friday’s election, which showed an overwhelming victory for hard-line President Mahmoud Ahmadinejad.

Moussavi’s supporters have taken to the streets, often clashing with police and Ahmadinejad’s backers.

Iran’s government had criticized some of the media coverage and images, describing them as biased.

International news outlets, including CNN, can talk about rallies in their live reports, but they are not allowed to leave their hotel rooms and offices.

Iranian government-run television, which was not affected by the restrictions, aired live coverage of Tuesday’s rally in support of Ahmadinejad, whose supporters crowded the streets of central Tehran.

In addition to restricting foreign journalists, Iran also blocked access to certain online communication tools — text and video — but many Iranians were able to find a way around the restrictions – such as a blurry video clip posted on YouTube showing a gunman killing protesters in Tehran Monday evening.

In the clip, likely shot from a cell phone, a blue-shirted gunman fires an AK-47 into a courtyard from a second-story window.

In the foreground, a crowd of protesters shouts slogans as dozens of shots ring out. The gunman and his targets are behind a high wall, so the crowd doesn’t move.

The footage broadly matches an incident that took place Monday evening in Tehran, as young protesters broke into a compound used by the Basij paramilitary force. Seven were reported killed as Basij members fired upon them.

The Basij, or “Mobilization,” were founded by Ayatollah Ruhollah Khomeini in late 1979 to militarize women and men who were either too old or too young to serve in the regular military. Teenaged Basiji sacrificed themselves by walking into minefields ahead of tanks during the 1980-88 Iran-Iraq War.

After the war, the Basij was opened up to men of all ages, though recruitment took place mainly among the urban and rural poor. They became the frontline of enforcement of authority and were notorious for cracking down on protesters during a wave of student dissent in the late 1990s.

Since hardline President Mahmoud Ahmadinejad took office in 2005, the Basij has grown in numbers and influence, and it is directly controlled by the Revolutionary Guards, Iran’s ideologically pure parallel military.