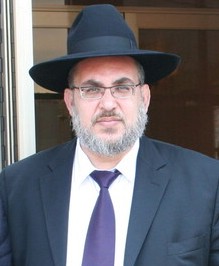 [VIDEO LINK BELOW] YWN interviewed on Monday, R’ Yaakov Asher, the newly elected Mayor of Bnei Brak, home to one the largest concentration of Charedi Jews in the world with a population of over 160,000.

The Mayor arrived in the United States several days ago, and is here to introduce to the US public the establishment of the Development Fund for Bnei Brak, whose mission will be to attract foreign investment to Bnei Brak and be responsible for projects to enhance the quality of life for its residents both current and future.

His first two goals, immediately after assuming office are: to lead the city into economic independence by promoting the building of high-risers in the northern portion of the city,  as well as commerce and related industries; and the creation of a development fund, much like the one founded by the past mayor of Jerusalem, the late Teddy Kolek, through which donors from around the world who understand the importance of preserving this precious Torah city, will support various welfare, education and over-all quality of life enterprises for its residents.

According to Ezra Friedlander, CEO of the Friedlander Group, representative of the Bnei Brak Fund, the visit of Mayor Asher will allow him to meet with important communal and business leaders from across the broad spectrum of the Jewish community in an effort to create interest in this new entity that will focus on initiating and partnering projects with potential investors that will focus in the realm of recreation and special education.

Bnei Brak is synonymous with the timeless values of Jewish tradition boasting a myriad of Chasidic centers, Shuls, famous Yeshivas and can be describes as the capital chesed in the Land of Israel. Additionally, the vast majority of the NY Jewish community shares a close kinship with Bnei Brak both familial and communal. It is with these statistics that great anticipation is being generated towards the maiden trip of Mayor Asher to the United States.

YWN thanks The Friedlander Group, for arranging the interview.