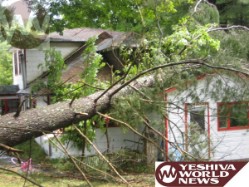 [Click HERE for photos] An open miracle was witnessed just a short while ago as a dangerous storm ripped through the Harris area, knocking down huge trees like toothpicks, and leaving the area without power.

A YWN reporter was on the scene to see the destruction, as dozens of trees were seen scattered throughout Perler’s Cottages and Victory Cottages on Big Woods Road in Harris. The scene looks like a tornado touched down, although this has yet to be confirmed by the National Weather Service.

The photos taken by YWN speak for themselves, as readers can see the open Yad Hashem – with trees lying on top of bungalows and cars throughout the property.

One person told YWN that he stopped by Victory Cottages with his child for an appointment with a pediatrician who has a summer office there, when the storm suddenly started. He was standing underneath a tent in front of the doctors bungalow when the rains started falling. As soon as the winds began to get strong, his wife began to yell for him to run inside the bungalow. Just a few seconds after moving out from under the tent, a massive tree crushed the tent, knocking live wires all around the area he was just standing!

The tree fell just onto the porch of the doctors bungalow, missing the structure by inches!

The Monticello Fire Department is currently on the scene, and Chief Marc Friedlander tells YWN that his department is working as fast as possible to have the trees removed. The electric company is on the scene, as well as the NY State Police and Catskills Hatzolah – and are all working to keep the scene safe and have power restored.

Rabbi Bernard Freilich of the NYSP tells YWN that he is working to find places for a dozen families to spend Shabbos.

As we post this story, another wave of dangerous storms are passing through the area.

Please seek shelter, as the National Weather Service has issued another tornado warning for Sullivan County until 2:00PM / 2:30PM.