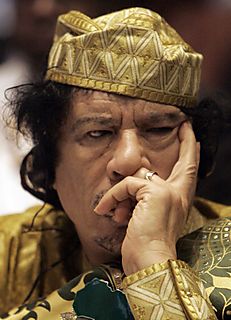 Secretary of State Hillary Clinton is adding a new task to her international diplomacy to-do list — booking a hotel room for Moammar Gadhafi ahead of next month’s UN General Assembly so the divisive Libyan leader won’t pitch a tent in New Jersey as he’s threatened.

Gadhafi often brings an (air conditioned) Bedouin tent with him along on international visits — but reports that he intends to set up camp in Englewood, N.J. has prompted howls from residents and lawmakers.

Rep. Steven R. Rothman, whose district includes Englewood, said he had taken the matter to the State Department and the White House, and both said they had “strongly urged the Libyan government to have Gadhafi remain only in New York City” during his September visit to the United Nations.

Gadhafi — recently photographed warmly embracing newly released Pan Am Flight 103 bomber Abdel Basset Ali al-Megrahi — is now receiving some accommodation help from Hillary Clinton , who is seeking to stem an international incident over the tent-pitching, the Daily News reported. Some of the Lockerbie bombing victims’ relatives live in the area.

The topic dominated the daily State Department news briefing yesterday. Spokesman Ian Kelly said officials and members of Congress are reaching out to local authorities about the issue.

“We’re also talking to the Libyans to highlight the concerns that we have and the very raw sensibilities or sensitivities of the families who live in that area,” Kelly said.

Gadhafi has been forced off property at the United Nations because the area is under construction. He asked to erect a tent in Central Park but the request was rejected.