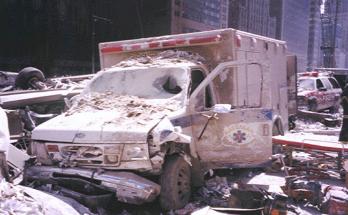 It is exactly eight years ago when that moment in history changed the world for ever. Of course, when it happened, many of us knew we’d never forget that day. Yet time dulls even the most painful memories. And this year, eight years after the attacks, the commemoration which takes place at Ground Zero begins to feel like a sad tradition – like the beginning of history. It also marks the first year that 9/11 will be recognized as a National Day of Service and Remembrance, an act signed into legislation by President Obama in April.

Vice President Joe Biden will be in the city to pay tribute to the victims of September 11th, while President Barack Obama will join families for another service at the Pentagon in Washington, D.C.

In Lower Manhattan, family members and survivors will gather at Zuccotti Park, located at Broadway and Liberty Street, across from the World Trade Center site. They will observe a moment of silence at the exact times each of the two planes hit and when each of the Twin Towers fell.

The family members will be paired with volunteers from the five boroughs to read the names of those who died in the attack.

AUDIO LINK: Click HERE to listen to the frightening radio transmissions of frantic Hatzolah members screaming for help as the World Trade Center collapsed on-top of them. Besides for a few non-life-threatening injuries not one of the hundreds of members at the scene was killed. Fast forward to 8:00 to hear the collapse of the first tower. The most frightening moment is at 12:20 – when a member tells the dispatcher “tell my wife at least I said Shema.”

VIDEO LINK: Click HERE to see the terror at the WTC filmed by a family at home a few blocks away on the 36th floor. The film has not been edited, and shows the second plane hitting the tower as well as both collapses.