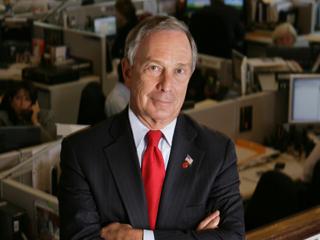 As municipal agencies are grappling with how to cut $1.75 billion from their budgets over the next year-and-a-half, Mayor Michael Bloomberg pledged today that he would not raise city taxes to close the city’s growing budget deficit.

Speaking in Central Park today, Bloomberg said his first responsibility is to provide key services to the city. He also said that he not rely on tax raises, to prevent displacing city residents and businesses.

However, the mayor said that layoffs of city employees could be needed to solve next year’s projected $5 billion budget gap.

“We’re just going to have to make choice in regards to which employees are providing the services that we feel are most important,” said the mayor. “I would love to be able to get through this without any reductions and any layoffs, although I think it’s unrealistic to think we could do this without reduction in the size of the workforce. We all know that at this point, after seven times of reducing the budget, there’s fundamentally salaries and personnel benefits that’s left in the budget.”

The mayor also said a great reduction in state aid could change his budget-balancing strategy.

Budget Director Mark Page sent a letter to city agency heads Monday calling for a savings of $1.75 billion over the next two budget cycles.

Most agencies will be required to slash four percent over the fiscal year beginning in July 2010, and eight percent for the year after that.

The Department of Education must reduce its costs by 1.5 percent and then four percent in 2011.

City agency heads have until December 3 to identify what they plan to cut.