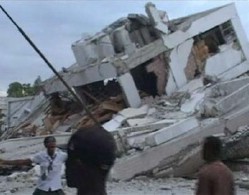 The powerful earthquake that rocked Haiti “destroyed” much of Port-au-Prince, the country’s first lady reported, as the widespread devastation in the country’s teeming capital came into full view Wednesday as dawn broke.

“We talked with the first lady of Haiti last night, at least our consulate general in Miami did,” Raymond Joseph, Haitian ambassador to the United States, told CNN’s American Morning, referring to Elisabeth Debrosse Delatour.

“And she said that she was all right and the president {Rene Preval] was all right, and most government officials were all right because this thing happened after hours, and most of the government buildings that have collapsed, collapsed after the employees were out.”

But “the bad news is that she said most of Port-au-Prince is destroyed, and she’s calling for some help in the form of a hospital ship off the coast of Port-au-Prince, just in the same way that the United States had helped us in 2008 after four hurricanes hit Haiti in three weeks.”

The quake’s destruction included the U.N. peacekeeper compound, a five-story building where about 250 people work every day.

Three Jordanian peacekeepers died and an additional 21 were injured, according to the state-run Petra News Agency.

The U.N. Haitian mission chief and the agency’s deputy special representative are unaccounted for in the wake of the devastating earthquake in Haiti, U.N. Secretary-General Ban Ki-moon said Wednesday.

The International Federation of the Red Cross estimated that 3 million people were affected by the earthquake.

Most of Haiti’s 9 million people are desperately poor, and after years of political instability the country has no real construction standards.