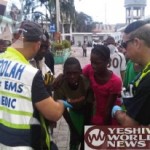 [PHOTO LINK & LIVE UPDATES BELOW] 12:00PM EST: Port-au-Prince, Haiti – The only operating room (O.R.) in earthquake-ravaged Haiti is that of the Israeli Field Hospital.

YWN has spoken to the IDF Field Hospital Deputy Commander Danny Moshayov on the ground in Haiti just a few moments ago, along with veteran Hatzolah Paramedics Shlomo Zakheim & Eli Rowe — who described the scene in great detail.

Although many many government’s across the globe have sent search & rescue teams, aid, and funds to the area, what is most notable is the fact that Israel came from halfway across the globe and was from the first countries to establish a fully functioning hospital.

“Our hospital has the only functioning O.R. in Haiti currently, and we have treated well over 100 people since we started,” Moshayov told YWN.

“Israel is from the smallest countries in the world, and yet we have close to 200 Israeli’s working aggressively to save & preserve lives. We have a full staff of surgeons, pediatricians, internal physicians, and emergency medicine physicians working round-the-clock on victims of the 7.0 earthquake, he said.

“I am proud to be a part of this tremendous Kiddush Hashem”.

Meanwhile, two veteran Hatzolah Paramedics, Shlomo Zakheim (Flatbush Division), & Eli Rowe (Queens Division), made the trip to Haiti, and are working at the hospital assisting patients with a multitude of injuries.

“What the Israeli Government has done in Haiti is truly amazing,” Zakheim told YWN.

“I can’t begin to describe you the incredible amount of equipment they brought with them in such a short time, and established so quickly.

“Everything from incubators (for premature births), to a full-blown ICU, an O.R.”…. It’s just incredible. They plan on being here for a month. They even came with a Rabbi and Shul so they can daven with a Minyan and say Kaddish.”

“The word is out in Haiti,” Eli Rowe told YWN.

“The victims have heard that the best care available currently is that of the IDF, and people are streaming to their hospital.”

So far, Shlomo Zakheim & Eli Rowe have treated over twenty victims – in just a few hours.

“The scene is horrific” Zakheim said.

“People are burning bodies in the streets to prevent epidemics, and there is still no electricity and no running water in the area. One time our vehicle stopped for a moment, and dozens of people tried to break into our car – just to get water. Everywhere you look there are children standing and crying – with no parents standing with them. ”

Additionally, three Search and Rescue units were sent to areas damaged by the earthquake in Port-au-Prince. The units are under the command of company and division commanders of the search & rescue unit of the Homefront Command and include rescue officers, security officers, and the famous Oketz canine unit which utilizes dogs in order to find survivors.

At this very moment of posting, the crew is working at a building where search & rescue teams hear someone alive, and are frantically working to free the trapped victims.

UPDATE 1:32PM EST: We were out treating patients in the streets, when the UN informed us to immediately return to our base after gunshots rang out in the area….

UPDATE 1:45PM EST: They just brought a baby not breathing into our base, and we assisted in intubating the child…..

UPDATE 2:02PM EST: The Hatzolah volunteers tell YWN that an aftershock just struck lasting 30 seconds, and caused a building to collapse. “The entire building just collapsed just down the street from where we were standing. We rushed over, and sadly, there are seven people confirmed dead. It’s so tragic how they survived the main quake last week, and now were killed in an aftershock.”

“We assisted a search & rescue team with the initial search, but have been called away to treat victims further up the street with injuries.”

UPDATE: 2:33PM EST: The 2 Hatzolah volunteers have just taken a break from treating victims, and are distributing candy to the children of Haiti – a true Kidush Hashem! (See photo album link below for the exclusive images).

YWN will continue to bring you exclusive further updates & photos from the IDF Field Hospital – and live from the devastation in Haiti.