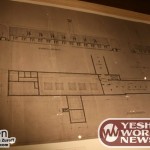 [YWN VIDEO & PHOTOS LINKS BELOW] The Auschwitz-Birkenau Blueprints were unveiled Monday at Yad Vashem by the opening of the exhibition “Architecture of Murder”. Prior to the speeches, the media was given a sneak peek of the actual blueprints, one of them actually bearing Henreich Himmler YM”S signature, by Mr. Avner Shalev, chairman of the Yad Vashem Directorate.