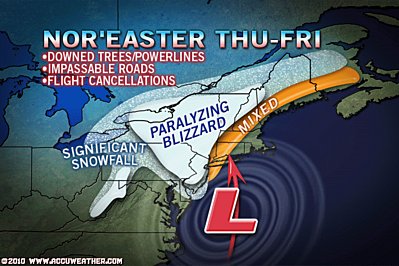 The following is from Accuweather.com:

A powerful storm of historical proportions is aiming at much of the Northeast Thursday into Friday and will follow up to a foot and a half of snow through Wednesday over upstate New York and western New England.

At its peak, the storm will deliver near hurricane-force wind gusts (74 mph) blinding snow falling at the rate of over an inch per hour. For some people in upstate New York and eastern and northern Pennsylvania, this may seem more like a “snow hurricane” rather than a blizzard.

Cities likely to be impacted by heavy snow for all or at least part of the storm include: New York City, Albany, Rochester, Syracuse, Binghamton, Scranton, Allentown, Reading, Williamsport and Burlington.

The storm also deliver heavy rain and flooding northeast of the center of circulation.

The cities of Boston, Providence and Portland may have their hands full with coastal flooding problems.

The combination of wind, heavy rain and heavy snow will lead to extensive power outages and property damage. Where numerous trees and lines are blown down, the power could be out for a week in some areas.

Impacts on travel in the region may be severe. The effects of the storm will lead to flight delays and cancellations. Some major roads may be blocked by snow, downed trees or flooding.

Exactly where this storm forms and tracks will determine whether you get all snow, all rain, snow to rain or just snow showers. A variance in track of as little as 50 miles will make a difference.

One thing is for sure, most people in the mid-Atlantic and New England will have problems from this storm’s strong winds.

YWN will keep you posted on the latest developments on snowfall and other impacts on this potentially very dangerous, destructive storm.