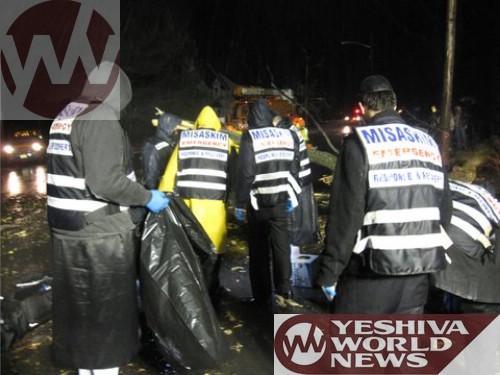 It started minutes after Shabbos when Misaskim received a call from Teaneck, NJ, that a tree fell and R”L killed two people coming home from shul. When all of humanity huddled indoors and complained about the howling winds outside, twelve Misaskim volunteers and the Chaplain from the Teaneck Police Dept. Rabbi Abe Friedman, stood in the pouring rain for hours to clean up the accident disaster site al pi halacha. Afterwards, Misaskim arranged for the shmira overnight and in the morning a Misaskim team was dispatched to the morgue in Bergen County to have the bodies released in a timely manner, without comprising the kavod hames. B”h, Sunday night, one aron was on the 7:30 flight to Eretz Yisroel and the second levaya took place on Monday morning.

While in the morgue, the Director of Public Safety for Kiryas Yoel, Rabbi Moses Witriol, who was there at the time, to help Misaskim expedite the release of the niftarim noticed two Jewish-sounding names of bodies scheduled for an autopsy on the following day; Ron Sandburg and Elliot Nissenbaum. After inquiring, Misaskim was told that these were victims of a Motzei Shabbos fatal fire in Fort Lee, NJ, and since no family member had objected to the autopsy they were going to happen Monday morning. It was difficult to track down the next of kin. The police department refused to share the information, due to privacy laws. Numerous other law enforcement agencies were asked to help, but these efforts yielded no result. By sheer coincidence, Rabbi Witriol recalled doing a business dealing with those men in the 1990’s and recalled the name of their real estate management company. After many more leads, Misaskim heard that they recently closed a mortgage deal with a prominent mortgage firm, and the firm’s president connected Misaskim with the sister of Mr. Ron Sandberg from Brooklyn, NY and the sister of Mr. Elliot Nissenbaum from Boston, Massachusetts. Both women came down to Bergen Counties Coroners Office signed the ID documents and objection for the autopsy. Both bodies were released Monday afternoon to the funeral homes, once again, without compromising the kavod haniftar.

On that very same day, Misaskim received a frantic call from Telshe Yeshiva in Riverdale, NY. Their electricity was down due to the horrific storm. Besides for bittul torah, they had an event scheduled for that evening. Misaskim supplied a generator, restored the Bais Midrash’s electricity temporarily, and earned the zechus of two hundred bachurim’s torah learning – and a successful gathering.

To top off the eventful day, a family flying their ten-day-old newborn on a incubator from Eretz Yisroel to Columbia Presbyterian Hospital in New York for emergency heart surgery called out to Misaskim to help them transport the baby to the hospital from the airport. Misakim, once again, found the heart, time and resources to answer this plea for help. All this in just a mere 24 hours.