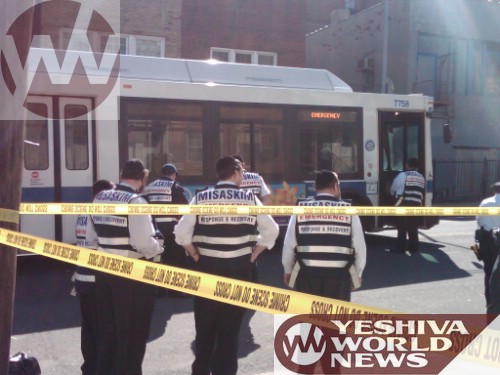 11:55AM EST: A Jewish woman was R”L killed after she was pinned under a bus in the East Tremont section of The Bronx, YWN has learned.

The accident occurred at approximately 8:00AM Wednesday morning, at the intersection of East Tremont Avenue and Crotona Avenue.

She was pronounced dead on the scene, and NYPD investigators soon found out that she was Jewish, and Misaskim was requested to the scene.

Preliminary reports are that she was driving a bicycle, and swerved to avoid a car-door that had suddenly been opened in front of her.

Misaskim dispatched a team of 10 volunteers, and 2 disaster responses vehicles to the scene, and have begun their Avodas Hakodesh.

Sources tell YWN that the woman has been identified as 58-year-old Mrs. Megan Charlop A”H, and is a cousin to Rabbi Zevulun Charlop, the Rabbi of Young Israel of Mosholu Parkway.